A Children's Letter to President William McKinley after his Assassination Attempt 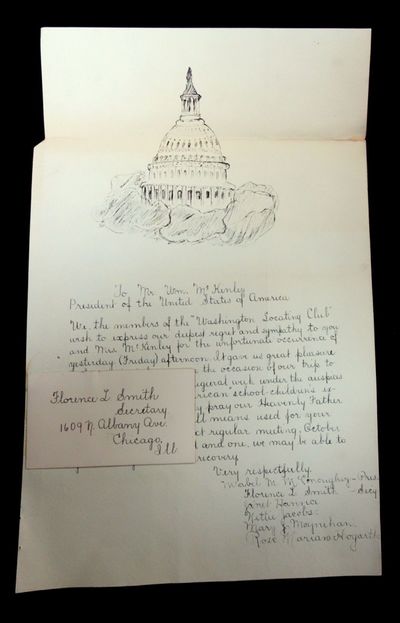 by Florence L. Smith
Chicago, IL: Washington Locating Club, 1901. General wear, toning, and creasing.. A manuscript letter sent to President William McKinley by a children's club wishing him health and recovery after the assassination attempt on his life on September 6, 1901. The club was the "Washington Locating Club", which was located in Chicago. The children had met President McKinley the year prior "during inaugural week under the auspices of 'Heart's Chicago American' school children's excursion." McKinley was apparently going to meet with the school children again on October 5, 1901, but due to his death, obviously never made it.

At the top of the letter is a drawing done in pen of the US Capital Dome. The letter is signed by six children, though the letter appears to have been written by the Secretary of the club Florence L. Smith (1887-?), who based on census records (confirmed by her address), was thirteen at the time of the letter. Pasted onto the side of the letter is a card with Florence's name and address. Measures 13 1/2" x 8" President McKinley would die from his injuries on September 14, 1901. (Inventory #: 29001068)
$95.00 add to cart or Buy Direct from Eclectibles
Share this item