[Portrait of James Abbott McNeill Whistler in front of the Thames] 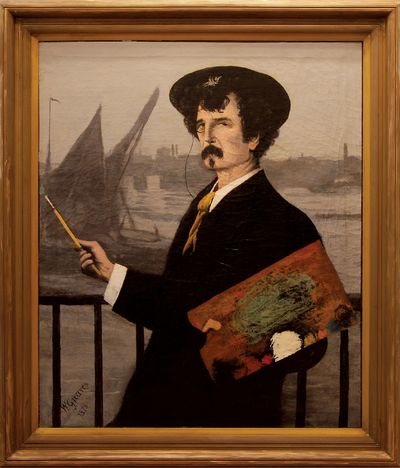 Christie's notes re. 26 January 2011, lot 233 (a full-length portrait). 'Walter Greaves was the son of a Chelsea boat builder and, along with his brother Henry, devotees of James McNeill Whistler (1834-1903). They first met Whistler when he moved to Cheyne Walk in 1863 and the three became inseparable friends for the next twenty years. While the brothers taught Whistler to row, he encouraged them to draw and paint, insisting that they describe themselves as the 'Pupils of Whistler'. The relationship was an extraordinary clash of cultures. Whistler was the sophisticated cosmopolitan, widely traveled and an exponent of the latest artistic fashions. The lives of the Greaves brothers, on the other hand, were entirely bounded by Chelsea, and their paintings were as primitive as Whistler's were à la mode. But the friendship worked. He liked the Greaveses and described them as 'a sort of Peggotty family', patronizingly but not unkindly, and certainly accurately. The present picture is dated [...1875], but this should be treated with caution. Tom Pocock writes, in his definitive account of the relationship between Whistler and Greaves, Chelsea Reach, of Walter's 'extraordinary vagueness about dates', and warns that the dates on his pictures and drawings 'were sometimes added years later, and could be wrong by five or ten years'. Even if ... [1875] is correct, we still cannot be quite sure where the scene is set, since Walter often worked from memory long after the event. Whistler is seen either on the balcony at 7 Lindsey Row or that of the grander 2 Lindsey Row. ... The upper-floor balcony, of a type sometimes known as a 'widow's walk' because it served as a look-out for women watching anxiously for their seafaring menfolk, resembles one that had featured in Whistler's own painting Variations in Flesh Colour and Green: The Balcony (Washington, Freer Gallery of Art), and since this dates from 1864-5, well before Whistler transferred from 7 to 2 Lindsey Row, it may be a reason for arguing that Greaves's picture too is a reminiscence of the earlier abode. The relationship did not last. As Whistler himself said, 'it is a dangerous thing to be a pupil of Whistler', because the master could not abide competition, and when a pupil transgressed by drawing too much attention to himself or failing to show due deference, he would be cut out of Whistler's life forever. In 1911 William Marchant, the proprietor of the Goupil Gallery in Regent Street, where Whistler himself had exhibited in the past, acquired a large collection of Walter Greaves's paintings and etchings through another dealer. They included the artist's early masterpiece, Hammersmith Bridge on Boat-Race Day (Tate Gallery). Marchant decided to mount an exhibition, promoting Greaves as a forgotten follower of Whistler, and this he did with entrepreneurial flair. Walter seemed to be on the brink of securing recognition and critics vied with one another in their praises, and leading artists - William Nicholson, Augustus John and Walter Sickert among them - lent their support to the idea that Marchant had discovered an 'unknown master' of enormous talent. It was even claimed by some that Walter was a greater artist than Whistler, and may have influenced him. The fact that Walter had inadvertently dated a painting of Old Battersea Bridge 1862, long before Whistler had painted his famous version of the subject, seemed to confirm these arguments. The exhibition itself was crowded, and most of the work sold. Marchant made Walter a generous allowance and set him up in a studio almost next door to the Goupil Gallery. This recognition did not last and Joseph and Elizabeth Pennell, Whistler's biographers and the self-appointed guardians of the master's reputation, proved conclusively that the painting of Old Battersea Bridge was much later than 1862, and that other paintings had also been mistakenly dated by Walter long after they were painted. The implication was clear; Walter was not the genius it was claimed, and certainly not in any sense Whistler's mentor. Walter died in 1930 having been admitted to the Charterhouse as a poor brother. A poignant end for a man whom Sickert, in an article written at the height of the Goupil imbroglio, had described as 'a great master' whose Hammersmith Bridge was 'a staggerer'. As he looked at the picture, Sickert wrote, 'the only thing it reminds me of is Carpaccio...Its perfect navet results in the purest art. (Inventory #: 25520)
$35,000.00 add to cart or Buy Direct from
Donald A. Heald Rare Books
Share this item
Donald A. Heald Rare Books
Offered by

An American Four-In-Hand in Britain