Twenty-Five Years in the Rifle Brigade 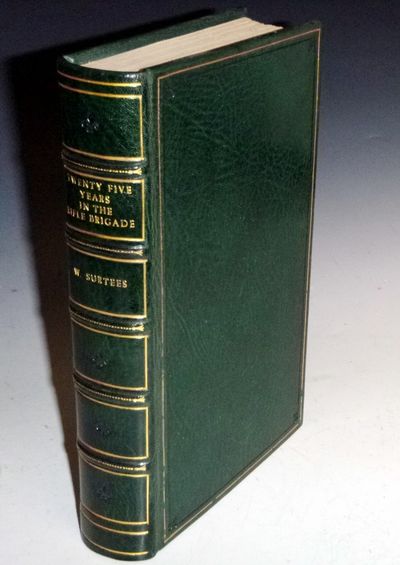 by Surtees, William (late, Quartermaster)
Edinburgh: Wiliam Blackwood and Sons, 1833. Octavo. viii, 435pp. The author, Quartermaster, William Surtees died in 1830, three years prior to this publications which was edited by his brother John then published. The author's military service began in 1795 at only 17 years of age, as a private soldier in the Northumberland Militia. In the following year he volunteered into the Pompadours. He later entered the Rifle Brigade where he was attached for 25 years. In his last days, William prepared his manuscript for publication. After his death, his brother John had the manuscript published without making any corrections though he knew if his brother was alive to publish it, he would have made those needed changes. This is a record of the important events of his life in the Rifle Brigade. Bound in modern green leather ruled in gilt and blind, raised bands with compartments ruled and lettered in gilt, decorated in blind, renewed endpapers. A very nice copy. (Inventory #: 022454)
$650.00 add to cart or Buy Direct from
ALCUIN BOOKS, ABAA
Share this item

Austin : Texas Folk-Lore Society , 1943
(click for more details about A Tenderfoot Kid on Gyp Water (introduction By J. Frank Dobie))
View all from this seller>