The Story of the Household Cavalry (2 Volume set) with Vol. 3 Which Was Issued 17 Years Later By a Different Publisher 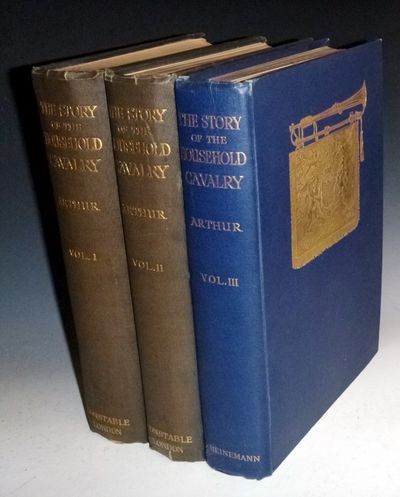 by Arthur, George
London; 1909, 1909 and 1926: Archibald Constable and Co./William Heinemann. Small Thick Quarto. Portrait frontispieces, half-titles, [xviii, 400, [4], [401-777pp.], index.. The definitive work on the Household Cavalry through the end of World War I. Both volume I and II are in the original brown cloth binding with the gilt emblem showing the service in the Peninsular War, at Waterloo, Egypt 1882, and Tel el-Kebir on both front covers. Very nice copies without the darkening to the spine which often occurs. In addition, Volume III, 271 pages, which was issued 17 years later and issued by a different publisher [Heinemann] and inscribed by the author to Lady Godiva, with a preface by F.M. Allenby. Much on Haig, Marshal Foch, and the major figures of World War I. Because of the length of time before Volume III was completed, the sets usually that have come to auction in recent years have only the first two volumes together. the motto of the royal arms, Dieu et mon droit, being displayed on a scroll beneath the shield the motto of the royal arms is the seal used on Volume III. A very nice set. (Inventory #: 027704)
$775.00 add to cart or Buy Direct from
ALCUIN BOOKS, ABAA
Share this item