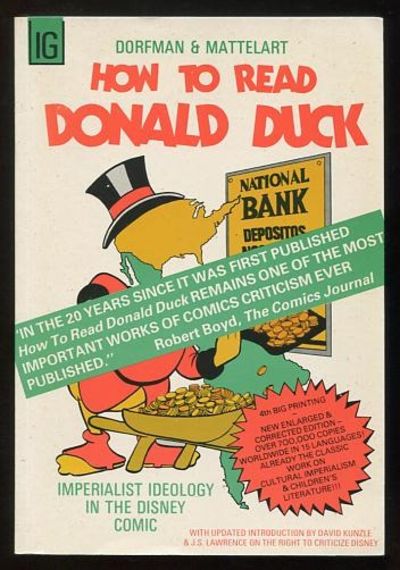 by Dorfman, Ariel, and Armand Mattelart (translated by David Kunzle)
New York: International General (I.G. Editions, Inc.). Near Fine. 1991 (c.1975). Corrected & Enlarged. Softcover Fourth Printing. [light spotting and minor creasing to front cover]. Trade PB (B&W comic book reproductions) The classic Marxist interpretation of the comic books put out worldwide under the Disney brand, with a particular focus on the money-grubbing adventures of Uncle Scrooge, "the World's Richest Duck." Originally published in Chile in 1971, it was "banned and burned" as soon as the government of Salvador Allende was toppled in 1973. A randomly-sampled couple of observations from the text: (1) "The world of Disney is a nineteenth century orphanage. With this difference: there is no outside, and the orphans have nowhere to flee to." (2) "Mr. Disney, we are returning your Duck. Feathers plucked and well-roasted. Look inside, you can see the handwriting on the wall, our hand still writing on the wall: Donald, Go Home!" (There's something like this on every page.) The translator, art historian David Kunzle, has contributed a long and erudite (and resolutely critical of Walt Disney) introduction to the English edition. This printing (the fourth) incorporates some additional front matter not present in the first (1975) printing, notably a full page of excerpts from reviews of the English-language edition; David Kunzle's introduction has been updated for this printing, which also adds an appendix by John Shelton Lawrence, "Donald Duck vs. Chilean Socialism: A Fair Use Exchange," addressing the legal and political right to criticize Disney. It's been stated that the book had been "banned in the USA," but this seems to have been something of an overstatement of the fact that a shipment of the 1975 English-language edition had been seized by U.S. Customs officials concerned about its possible infringement on Disney's copyrights, but released after a year when it was ruled that the mere act of importing the book did not constitute "piracy." . (Inventory #: 25422)
$25.00 add to cart Available from ReadInk
Share this item
ReadInk
Offered by

New Tales of the Cthulhu Mythos

Who Knocks?: Twenty Masterpieces of the Spectral for the Connoisseur

New York : Rinehart & Company, Inc. , (c.1946)
(click for more details about Who Knocks?: Twenty Masterpieces of the Spectral for the Connoisseur)
View all from this seller>