Indians, Infants and Infantry: Andrew and Elizabeth Burt on the Frontier 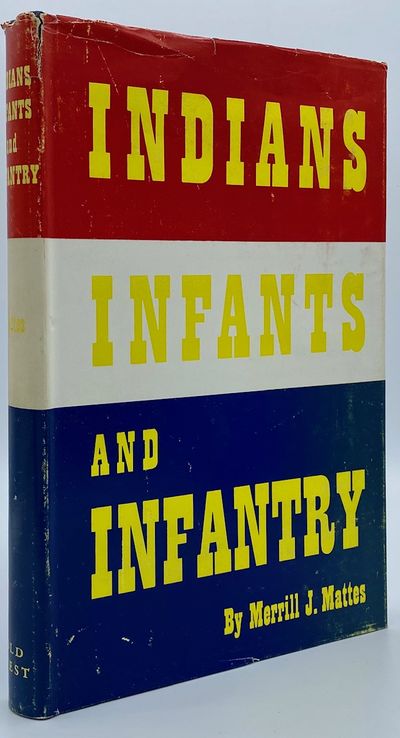 by Mattes, Merrill J.
Denver: Old West Publishing Company, 1960. First Edition. 304pp. Octavo [23.5 cm] Blue cloth with the title gilt stamped on the backstrip. Very good/Very good. Gentle wear to corners of jacket. map endsheets and pastedowns. "In 1866, after a brilliant Civil War career, Captain (Brevet Major) Andrew Burt marched with the 18th C.S. Infantry under Colonel Carrington from Fort Kearney to Julesburg. Then while Carrington led the bulk of his command north via Fort Laramie to erect ill-fated Forts Phil Kearny and C.F. Smith on the Bozeman Trail, Major Burt marched westward up the Lodgepool route. He became the first regular army officer to resume command at old Fort Bridger after its interim occupation by volunteers. Major Burt was the last officer in command at dangerous Fort C.F. Smith, Montana Territory, which was abandoned after the Fort Laramie Treaty of 1868, which ended Red Cloud's War. Here, in two carefully documented chapters, is the first complete history of Fort C.F. Smith, remote outpost on the Bozeman Trail, which has long been shrouded in obscurity. For the first time events following the Fetterman Massacre and leading the bloody Hayfield Fight are revealed. Mrs. Burt's memoirs, dusty army records and other rare sources have been searched to illuminate one of the most critical episodes in the annals of Indian warfare." - from the jacket. (Inventory #: 3895)
$15.00 add to cart Available from
Tschanz Rare Books
Share this item