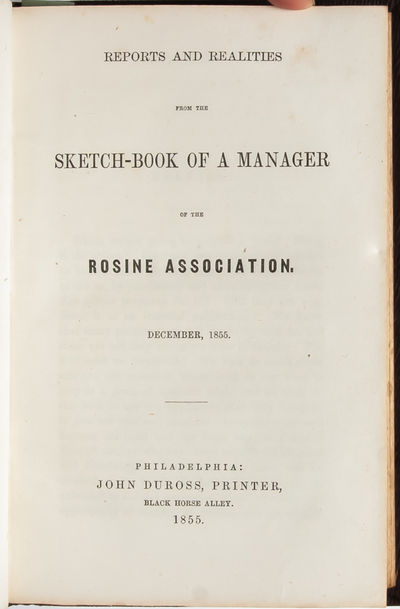 by [Sex Workers] [Activism and Reform] [Townsend, Mira Sharpless]
Philadelphia: John Duross, 1855. First edition. Near Fine. Original publisher's cloth binding embossed in blind with gilt to spine. A tight, square copy with sunning to the spine. Scattered foxing to preliminaries, with remainder of text block surprisingly clean and bright. Early ownership inscription to the front endpaper reveals this to be a family-owned copy, passed down from the author Mira Sharpless Townsend: "The poetry and full contents of this book was written by my great grandmother Mira Sharpless Townsend who was the founder of the Rosine Association (Home -- as it was called). Claire Spenser Grubb." A scarce title with an important association to the founder of a key organization aiding women gain educational and employment opportunity after escaping the sex trade.

Nineteenth century Philadelphia was a hotbed of reform, giving women a range of opportunities of civic and political involvement. The Rosine Association emerged out of this space -- and it was a direct response to problems in the existing Magdalen Society movement. The Magdalen Societies, named for the reformed prostitute in Jesus' retinue, aimed to provide "fallen" women with moral guidance and economic security; but their harsh emphasis on Biblical training and penance, and their rigid schedule of daily domestic work sat poorly with some. Thus, out of a private meeting at a house on Cherry Street in 1847, the Rosine Association was founded. "The new association took a different tack from the existing Magdalen Societies, both because its founders objected to the latter's supervision by men and because they considered its approach repressive. Philadelphia Rosines insisted on female management, both at the policy-making level and in the daily supervision of the institution, promising sympathy and the example of 'respectable' women to the participants. The Rosine Association determined that the girls needed marketable skills and training in household management, so their approach included education and some free time, with no emphasis on moral regeneration" (Encyclopedia of Greater Philadelphia).

Townsend, the bulk of whose papers reside at the Friends Historical Library, was a Philadelphia Quaker influential in advocating against capital punishment and on behalf of abolition. Townsend, "not as well known as Lucretia Mott but a force unto herself...led the establishment of the Rosine Association" (Swarthmore). "She was in the vanguard of a group of 19th century women who reimagined their roles bringing positive change to the world outside of their home circle" (Landes). Townsend led the organization with the idea that women could best understand the experiences and aid in the lives of other women. The present volume, which includes factual reports as well as poetry and essays, was passed down through the women of her family to her great-granddaughter. Near Fine. (Inventory #: 3343)
$1,000.00 add to cart or Buy Direct from
Whitmore Rare Books
Share this item

London : Bradbury & Evans , 1850
(click for more details about The Personal History of David Copperfield)
View all from this seller>