The Arts of Beauty; or, Secrets of a Lady's Toilet. With Hints to Gentlemen on the Art of Fascinating 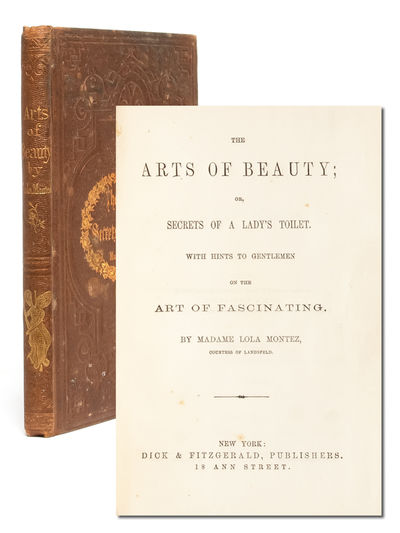 The infamous Lola Montez managed to fit multiple lives into one: actress and dancer, courtesan, mistress to King Ludwig I of Bavaria, Countess of Landsfeld, and finally revolution-era emigree to California. In each of these roles, she relied on a finely honed sense of social diplomacy and wit to accomplish her ends; and The Arts of Beauty is the perfect textual product to encapsulate these skills. Engaging with classical satirical texts like Ovid's Ars Amatoria as well as contemporary conduct guides penned by men for the "benefit" of women, Montez composes a manual that is part informative beauty instructor and part parody. The Greek and Roman sources she references point to her intellectual depth and position of authority -- on the first page of the preface alone appear names and quotations from Aristotle, Juvenal, Socrates, and Theophrastus -- but they are also used to set the cheeky tone of the work. "When Aristotle was asked why everyone was so fond of beauty, he replied 'It is the question of a blind man.'" Fully aware that a woman's success was often bound to both her ability to physically and mentally fascinate men, Montez sets an example for her reader while also providing practical information on how to maintain a beautiful figure, overcome blemishes, dress to best advantage, and socially comport oneself. The Arts of Beauty are thus more than cosmetic -- they are power. Like Ovid before her, Montez also can't help but direct her book toward both sexes. Why should men not concern themselves as well with performing? To this end she provides a hilariously misguided series of 50 recommendations on how men can make themselves attractive to women. "Rule the Thirteenth. If you invite a lady to the theatre, neglect not to leave her, and go out to drink with your male friends between each act, as this will show her that you have confidence that she can protect herself... Rule the Twenty Second. Should you invite a lady out to supper you must, by all means, order three times as much expensive dishes as it will be possible for you to eat, as this will show her that you have a generous disregard for money...which will convince her your wife will never want." Ultimately, Montez's dedication is the most honest moment of the text, inviting readers to be in not only on the joke of the book, but on the true lessons that underlie it: "To all Men and Women of every land, who are not Afraid of Themselves, who trust so much in their own souls that they dare to stand up in the might of their own Individuality to meet the tidal currents of the World, this book is respectfully dedicated." Near Fine. (Inventory #: 3371)
$1,950.00 add to cart or Buy Direct from
Whitmore Rare Books
Share this item