Description of the Retreat, an Institution Near York 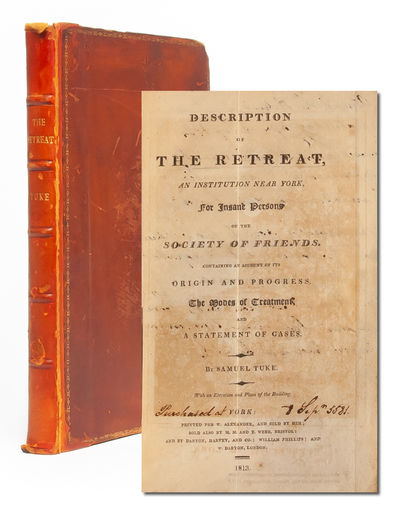 by [Social Activism] Tuke, Samuel
York: W. Alexander, 1813. First edition. Contemporary calf rebacked to style with gilt and five raised bands to spine. Generally a bit shelfworn and rubbed, but a tight, square copy. All edges marbled. Marbled endpapers. Armorial bookplate to front pastedown. Original owner's notes on recto and verso of title page in ink: "Purchased at...8 Sept 1821. Visited the Retreat Saturday aftern., 8 September 1821...with cleanly appearance & admirable arrangement of buildings, the Inmates looked far happier than could have been expected. The Matron & her husband have the most benevolent countenances that we had ever beheld." Light scattered foxing throughout, else unmarked. Complete, including three folding plates. An account of the groundbreaking work of the Tuke family and the Society of Friends for improving the care and dignity with which mental illness was treated.

At a time when the diagnosis and treatment of mental illness was often inhumane, William Tuke stepped forward in 1796 to found The Retreat. Its goal was to create safe, pleasing, and dignified conditions for those being institutionalized; and from its inauguration, The Retreat kept its doors open to public visitors who may want to witness and document the conditions of its campus and patients. In the present work, William's grandson Samuel Tuke publicizes the institution's "internal economy of management" as well as its "mild system of treatment." Transparency is key to continued progress, Tuke asserts; and he wants the Retreat's successes to assist in further advances in the field. "The interests of humanity and science alike call upon us to communicate freely the discoveries we make or the failures which happen to us...If persons engaged in the management of the insane were more generally to publish the results of their observation, we might reasonably hope that the causes of this obscure and affecting disorder would receive some illustration." While William Tuke's work remains revolutionary in improving method of caring for the mentally ill, Samuel Tuke's book "helped popularise the approach...to use the moral treatment method for restoring self-esteem and self-control in individuals" suffering from a range of ailments (Quaker World). As awareness of the model spread, so too did institutions build on its principles, with hospitals emerging in the UK and US. (Inventory #: 3361)
$1,750.00 add to cart or Buy Direct from
Whitmore Rare Books
Share this item

A young woman documents her travels, providing a sense of her mobility, historical curiosity, and activist engagement

The Conchologist's Companion; comprising the instincts and constructions of testaceous animals

by [Mary Roberts] The Author of Select Female Biography, Wonders of the Vegetable Kingdom, &c

London : G. and W. B. Whittaker , 1824
(click for more details about The Conchologist's Companion; comprising the instincts and constructions of testaceous animals)
View all from this seller>