The Golden Book of St. John Chrysostom, Concerning the Education of Children. Translated out of the Greek 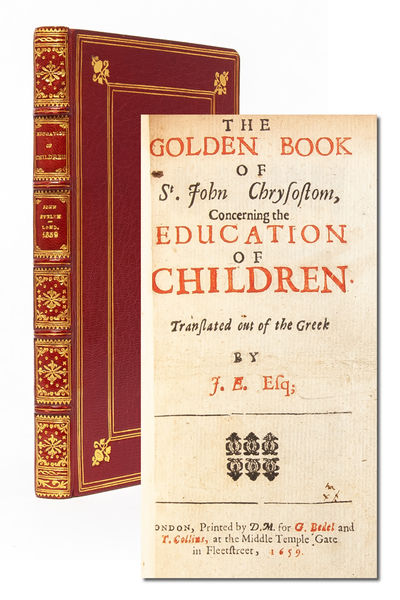 by [Evelyn, John] J.E., Esq
London: B.M. for G. Bedel and T. Collins, 1659. First edition. Twelvemo measuring 90 x 140mm (pages). Collates complete: [48], 90, [6]. Internally a pleasing copy, trimmed a bit close along the header but always retaining the page number and running titles. Small closed tear to lower margin of A6; some light marginal soiling on occasion, not affecting text. Several examples of contemporary ink marginalia and manicules. Finely bound in full red morocco with gilt to spine and boards; all edges gilt. Marbled endpapers. Bookplates of John Lawson and Anthony Fair to front pastedown. A scarce and early work on the social education, the present is the only copy on the market. ESTC records 12 copies, with only five of those in North America.

Grieving over the loss of his eldest son, famed diarist and social commentator John Evelyn turned to translation and study for consolation. The result of his efforts was The Golden Book, a tract encouraging parents to take a strong hand in their children's educations from infancy. Notably, these educations are less academic than social. Evelyn draws on the preaching of St. John Chrysostom, an early Archbishop of Constantinople who supported strong authority in church and family. And the present work's approach to gender in education is at times touched by Chysostom's own anxieties about the sexes as well as contemporary debates about fashion and sexuality in the Caroline court. "Chysostom's learning and eloquence sums up a long age of ever-growing moral outrage, fear, and loathing of homosexuality" (Allen). For Evelyn, education is about more than instruction in the classical languages or in reasoning; it helps to "compose and regulate children's manners." Of particular concern to Evelyn is what he perceives as the increasing vanity and effeminization of boys. "O vain man! Why dost thou instruct thy child, as yet free from this madnesse, in these trifles?...He hath no need of gold. And thou dost nourish him a lock of hair behind his ear like a Girle, effeminating thy son even from the very cradle. Softening thus the vigor of his sex...If a man weareth his hair long it is a shame unto him." In regard to girls, he complains against their rising independence and disregard of authority. "A maid when in her mother's chamber she hath learned to long for these various tires and ornaments of women becomes impertinent to her husband, and very troublesome." Early and reinforced education of both is critical to avoiding the defiance of gender expectations.

Emphasizing that "children may be instructed in Arts, Letters and Eloquence," he urges against the use of idle fables or fairy tales where lessons may be misunderstood or ambiguous. And he encourages children's education to be run with order and rigor, the power structure being clear and continuously reinforced. "Let Children hear nothing impertinent neither of their Domesticks or their Governours, nor their Nurse." Near the end, Evelyn touches on the dangers of lust to older children, and advises that wholesome activities and scriptural study be used to encourage chastity. "Physicians say that presently after the fifteenth year youths are vehemently inflamed with the Lust of Concupiscence. How shall we now fetter this beast?" Theatre should be avoided at all costs; sobriety should be maintained; and parents should only employ "some ancient Maid or Woman stricken in years" to do any service near their teen sons. A conduct tract that speaks to educating children into socially acceptable roles, rather than a text emphasizing classical learning.