A Version of Solomon's Song of Songs; Together with the XLV. Psalm 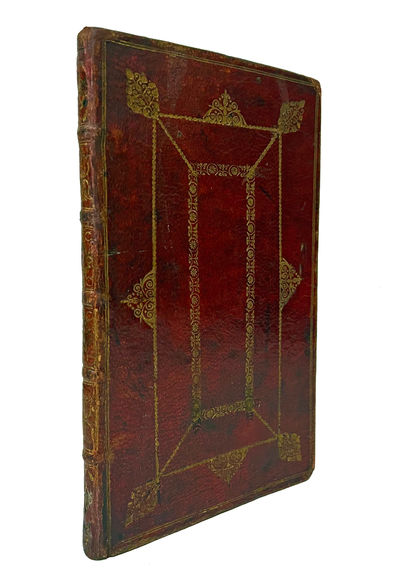 by [BIBLE]; Stennett, Joseph (translator)
London: Printed for Dan. Brown at the Black Swan and Bible without Temple-bar, and Andr. Bell at the Cross-keys and Bible in Cornhil, 1700. First edition of this verse translation of the Song of Songs by Joseph Stennett (1663-1713), the first important Baptist hymnwriter in England: "Thy Lips, my Spouse, that move with skill, / Drops like the Hony-comb distil. / Hony and Milk's beneath thy Tongue, / Which feeds the Weak as well as strong." In his scholarly preface, Stennett is quick to assure readers that the Hebrew text is not about sexual desire, despite appearances: "some have denied that [Solomon] wrote it by Divine Inspiration; and make his Design to be only that of celebrating his Amours with Pharoah's Daughter, or some other person." The passion of the bridegroom and the bride is to be understood, however, as a divine allegory of Christ's love for his church, the same "mystical Espousals" found in the 45th Psalm, which Stennett also translates here. Wing B2633AC, ESTC R212810. We locate four institutional holdings in North America (Emory, Huntington, NYPL, and the American Baptist Historical Society; ESTC adds Harvard, but that appears to be an error). A scarce early English translation of the most lyrical book of the Old Testament, in a handsome contemporary binding. Small octavo, measuring 6.5 x 4 inches: xxiv, 40. Contemporary full red paneled morocco gilt, raised bands, spine compartments decorated in gilt, marbled endpapers, all edges gilt. Old ink prices to verso of front free endpaper. Dampstaining to binder's flyleaves (not affecting text), expert repair to joints, binding lightly rubbed. (Inventory #: 1002658)
$3,000.00 add to cart or Buy Direct from Honey & Wax
Share this item

The Long-Winded Lady. Notes from The New Yorker

New York : William Morrow and Company , 1969
(click for more details about The Long-Winded Lady. Notes from The New Yorker)

France : no publisher , 1950
(click for more details about Dessin (design workbook))
View all from this seller>