Arguments of Thomas A. Jenckes, counsel for respondents in the matter of H. A. Harvey, Charles Ely, and Wm. G. Angell, claimants, vs. The American Screw Company, respondents. In arbitration, before Hon. Samuel Ames, Hon. James Y. Smith, Harvey Waters, Esq. With the paper and evidence submitted 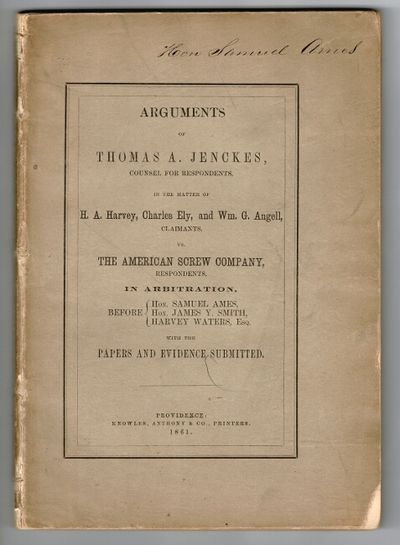 by Jenckes, Thomas A.
Providence: Knowles, Anthony & Co., printers, 1861. First edition, 8vo, pp. 113, [1]; top corners lost to pp. 81-96 (no loss of text); original beige printed wrappers; spine partially cracked; all else very good. With the signature at the top of the front wrapper of one of the judges, "Hon. Samuel Ames." With an inserted p. 48½ (affidavit of Francis A. Dyer), so noted by Ames in the table of contents. Thomas Allen Jenckes (1818-1875) graduated from Brown University in 1838 and studied law. In 1840 he was admitted to the bar and became partner with Edward H. Hazard. Mr. Jenckes also enjoyed a successful political career, serving many years in the Rhode Island General Assembly. He served also in the United States House of Representatives from 1863 to 1871. After his service in Congress, he again practiced law in Rhode Island and New York, specializing in patent litigations. Not in OCLC, Bartlett, or Parks. (Inventory #: 55922)
$172.50 add to cart or Buy Direct from
rulon-miller books
Share this item