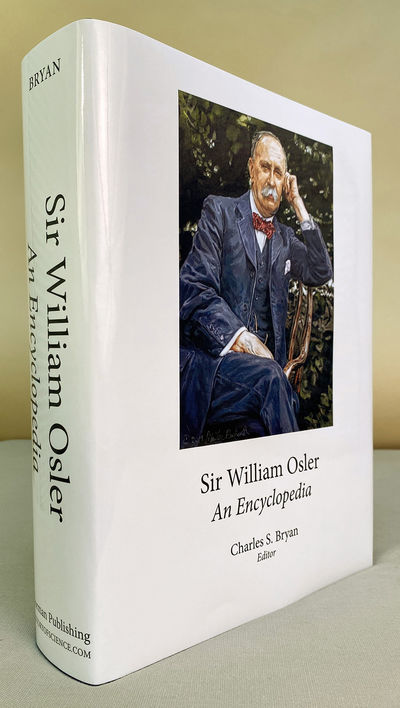 by Charles S. Bryan, editor
Novato, CA: Norman Publishing / HistoryofScience.com, 2020. 970pp. plus 22pp. front matter. 2-sided color frontispiece; 624 images. 8.5 x 11 inches. Full cloth; laminated dust-jacket. Sir William Osler (1849-1919) was the most famous and best-loved physician in the English-speaking world during the early twentieth century. Some consider him "the greatest physician of all time" or "the father of modern medicine." More commonly, he is seen as an avatar of humanism in medicine. The 135 contributors to the present volume address four questions, as follows:
What was Osler really like, and what did he do? Assembled for the first time in one place are reminiscences and tributes by more than 200 of Osler's contemporaries. His top character strengths, assessed with criteria developed by the Values in Action Classification Project, were kindness, vitality, and love of fellow humans. He used these to energize the medical profession and implement major changes in medical education.
What did he write, and who influenced his thinking? Presented here, for the first time in one place, are anal-yses of all of Osler's major non-technical writings along with sketches of those who influenced him. His interests changed over time from character-building and the unity of the medical profession to more fundamental problems of human existence, including whether science will ultimately prove a force for good or evil.
How has he been assessed during the century since his death in 1919? Wilbur Davison spoke for many who knew Osler: "We regarded him as perfect." Serious criticisms of Osler began during the closing decades of the twentieth century and crescendoed in 2018 when two Australian physicians argued it is time to unmask him "for the sake of historical truth, the values of science, and the integrity of medicine itself." Presented here are more than 25 criticisms and potential criticisms of Osler, mostly rendered through the lens of "presentism." Readers can use this information to decide whether Osler seems "too good to be true," as has been alleged.
Does he still matter, and if so, how? Osler became a "despairing optimist" after World War I, in which he lost his son. He closed his last public address, given in May 1919 on "The Old Humanities and the New Science," with the hope that through the Hippocratic combination of (love of humanity) and (love of science and technology), humankind might somehow find the wisdom () to survive and flourish. Those words became his valedictory, as he died later that year from complications of pneumonia.
Osler was voted "the most influential physician in history" in a 2016 survey of North American doctors, but his interests and influence transcend medicine. This volume offers the first comprehensive reference to Osler's personality, character, life, times, and thinking about a broad range of issues relevant to the human condition. . (Inventory #: 45472)
$125.00 add to cart or Buy Direct from
Jeremy Norman & Co.
Share this item
Jeremy Norman & Co., Inc.
Offered by