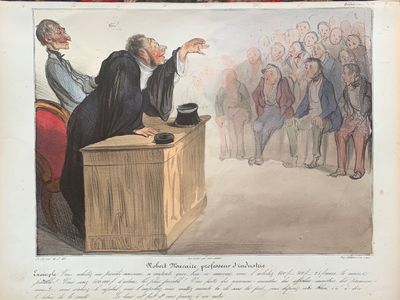 by DAUMIER, Honore and PHILIPON, Charles
Paris: Chez Aubert, 1836. hardcover. Lithograph with original hand coloring. 10 x 13 1/4 inches. Plate 23. Some scuffs, foxing and toning on left of image and margins but luminous coloring. Text below in French..."Example: Buy a new process, it doesn't matter which, or whether it's good or bad, buy it for 600F, 500F, 25F, for as little as possible. Create 500'000F worth of shares, as many as possible. Make out monster advertisements, monster posters, monster promises. Make the capital, pocket it, put the key under the door, file your bankruptcy papers, that's to say the company's papers... that's the end of that little game. You then go on to another." From the rare album of 100 caricatures called Caricaturana (Les Cent Robert-Macaire).This collaboration with Philipon takes aim at French society through satire behind the vehicle of invented swindler Robert Macaire. (Inventory #: 296442)
$500.00 add to cart or Buy Direct from
Argosy Book Store
Share this item