A Report on Separation of Street and Railway Grades Through the City of Durham From Gregson Street to Alston Avenue. Volume II: Railway Classification Yards and Engine Terminals 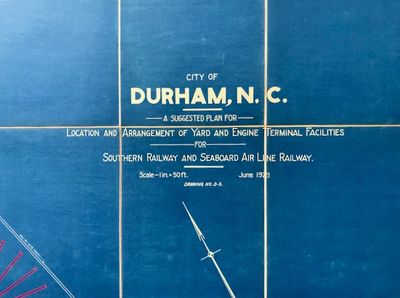 by Miller, Frank T. (consulting engineer)
Greensboro, North Carolina: Frank T. Miller, Consulting Engineer, 1921. First Edition. Hardcover. Very good. Quarto. Black covers with faded title on the front cover. 8 typed pages, front sides only, bound in before the folding blue print. The blue print is in several sections and is backed by sturdy linen. Linen very slightly frayed at a few edges. The blue print unfolded is approx. 14.5 feet long by 2.5 feet wide. Blue print is very clean and colors are very bright. The color scheme label is pasted down inside on one the first sections. The red lines represent Southern Railway facilities; yellow stands for S. A. L. Railway facilities; green represents D. & S. Railway facilities New or Revised Streets and Driveways; and orange stands for Joint facilities. Pictures are available of the folding sections but an entire bird's eye view of the blue print was not taken. A small amount of information was found on the internet during a quick search. One article in particular discussed the history of rail transportation in Durham and was copied here from carolana dot com . "Although Durham Traction Company retained its name and most officers were unchanged, Henry L. Doherty of New York and the H. L. Doherty Company controlled ownership by 1912. F. W. Frueauff of New York, the only non-Durham director in 1915, was president by 1920, when streetcar lines extended eleven miles within the city. The company's name changed to Durham Public Service Company in 1921. R. L. Lindsay, vice president and general manager, had been manager of Durham Traction. In 1921, the Durham Public Service Company operated 11.91 miles of track and carried 2,521,950." passengers. (Inventory #: 19333)
$500.00 add to cart or Buy Direct from Americana Books
Share this item

Memorial Services Held in the House of Representatives of the United States, Together with Remarks Presented in Eulogy of Leslie J. Steele Late A Representative From Georgia

Washington DC : Government Printing Office , 1920
(click for more details about Memorial Services Held in the House of Representatives of the United States, Together with Remarks Presented in Eulogy of Leslie J. Steele Late A Representative From Georgia)