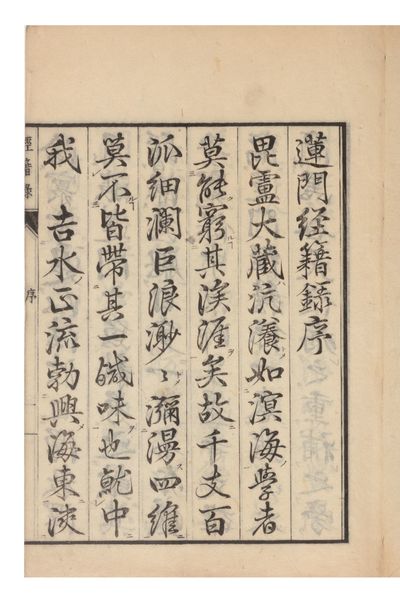 by RYORENJI (formerly NAKANISHI), Mon'no & UGAI, Tetsujo, comps
58; 67 folding leaves. Two vols. 8vo, orig. yellow wrappers (wrappers somewhat discolored), orig. block-printed title labels on upper covers, new stitching. Kyoto?: Preface dated 1862. An early and rare edition, greatly enlarged by Tetsujo Ugai, of this comprehensive bibliography of writings of the Buddhist sect Jodo Shinshu (also known as Shin Buddhism or True Pure Land Buddhism). It is today the most widely practiced branch of Buddhism in Japan. This catalogue, which amounts to a bibliography, was originally compiled by Mon'no Ryorenji (1700-63), one of the most influential Buddhist scholars of the 18th century and 17th head of the Ryorenji Temple in Kyoto. The temple was established in 980 by Genshin (942-1017), the author of Essentials of Rebirth, written in 985 and a central text in the development of True Pure Land school of Buddhism. The first edition appeared in 1741-44 and Tetsujo Ugai (1814-91), has made additions to Ryorenji's text. The catalogue includes descriptions of books, manuscripts, and scrolls from the earliest period to the 19th century. Details of authorship, title, date, number of volumes, affiliated temples for many authors, etc., are provided. A number of entries have extended descriptions of their contents. Fine set and rare. Minor worming, touching some characters, finely repaired. Not in WorldCat. (Inventory #: 7060)
$2,950.00 add to cart or Buy Direct from
Jonathan A. Hill, Bookseller
Share this item
Jonathan A. Hill, Bookseller, Inc.
Offered by