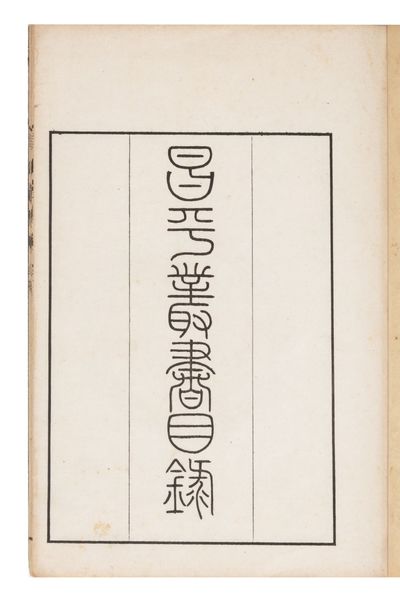 by YAMADA, Eitaro, ed
12 folding leaves. 8vo, orig. patterned wrappers, orig. block-printed title label on upper cover, new stitching. Tokyo: Shosanodo shoten, 1909. First edition of the catalogue of a part of the library of the famous Shoheizaka Gakumonjo school, which was located in what is today Ueno Park. The school had its origins as a private Confucian temple, constructed by Razan Hayashi (1583-1657), but was turned into a state-run school under the direct control of the bakufu in 1797, following the Kansei Edict. The school, an official academy of the Tokugawa shogunate, produced many outstanding leaders. The catalogue describes 64 titles printed in 667 volumes, chiefly devoted to Chinese studies, printed at the academy before its closure in 1871, following the Meiji Restoration. Title, number of volumes, author, and year are given. Tetsunosuke Tomita (1835-1916), the prominent banker and governor of Tokyo, found the woodblocks of these 64 publications and issued the present book to record their existence. Fine copy and rare. (Inventory #: 7062)
$1,250.00 add to cart or Buy Direct from
Jonathan A. Hill, Bookseller
Share this item
Jonathan A. Hill, Bookseller, Inc.
Offered by


(click for more details about Exhibition postcard: On Kawara: I Met (4 March-23 April 2005))
View all from this seller>