Hokkai shidai shomon [Chinese: Fa jie ci di chu men; Introduction to the Sequence of the Boundaries of the Dharma] 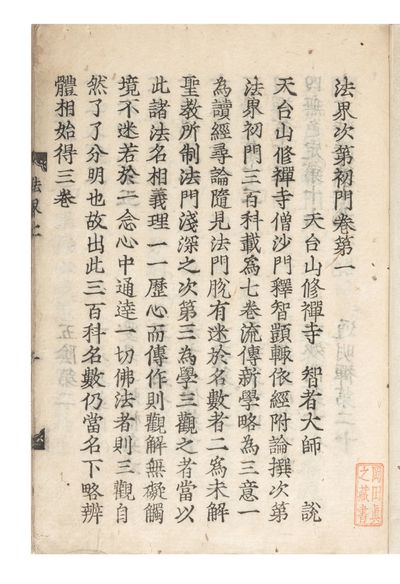 by ZHIYI
Ten columns, 20 characters per column. 34; 33; 42 folding leaves. 8vo (270 x 193 mm.), orig. pale brown wrappers (some relatively minor worming, mostly confined to the margins, but occasionally touching a character), new stitching. [Mount Hiei: before 1625]. A very rare movable type Eizan-ban; WorldCat and the Union Catalogue of Early Japanese Books do not record a copy. Kawase knows only of another edition with 19 characters per column, dated mid-Kan'ei (1615-33) and printed at Nishi Honganji Temple in Kyoto. Eizan-ban are books published at the Enryakuji monastery complex on Mount Hiei outside of Kyoto. "Eizan printing came into its own on a large scale only from the end of the sixteenth century, with the introduction of movable-type printing. Typographic printing flourished at various temples on Hieizan from the Keicho to Kan'ei periods (1596-1644), and with the publication of Chinese works as well as Tendai scriptures..."-K.B. Gardner, "Centres of Printing in Medieval Japan: late Heian to early Edo period" in British Library Occasional Papers 11. Japanese Studies (ed. by Yu-Ying Brown), London: 1990, p. 164. Zhiyi (538-97), was the founder of the Tiantai (Japanese: Tendai) tradition of Buddhism in China. "Tiantai was the earliest of the three great traditions to emerge in the sixth and seventh centuries (Faxiang and Huayan being the other two), and it wrought a fundamental change in Chinese Buddhism, marking a shift away from the kind of translation and exegesis that had been driven mainly by a desire to understand correctly the writings of the Indian masters towards a Buddhism more in tune with Chinese attitudes, thought and habit."-Richard Bowring, The Religious Traditions of Japan, 500-1600, p. 119. Zhiyi's Fa jie ci di chu men was composed sometime between 578 and 585; it is a collection of lessons on the Lotus Sutra, the ultimate teaching of the Buddha. Saicho (767-822), a monk who meditated and studied on Mount Hiei, became interested in the Tiantai doctrinal tradition. He decided to go on the extremely dangerous trip to Mount Tiantai in China for further study and to bring back more accurate texts. He departed in 803 and, after great hardship and study, returned to Japan in 805. On his way back, his luggage carried about 230 copies of texts of Tiantai writings. Thanks to his efforts, Saicho became the founder of the Tendai school of Buddhism in Japan. This copy is quite similar to the one (item 368) described in Shigeo Sorimachi's monumental 40th anniversary catalogue of 1972, devoted to movable type books. Like his copy, ours has a contemporary manuscript note, here found at the end of Vol. 2, stating (in trans.): "23 February 1625 I added the reading marks to the text and I paid in silver five monme. Kansenbo Rissha Norimori [or] Josei." In the Sorimachi copy, this inscription was at the end of the first volume, and the wrappers were described as dark brown. In fine condition. Final ten leaves of Vol. 3 with the blank outer upper corner renewed. (Inventory #: 7064)
$15,000.00 add to cart or Buy Direct from
Jonathan A. Hill, Bookseller
Share this item
Jonathan A. Hill, Bookseller, Inc.
Offered by