[Catalogue of Publications for Public Utility] 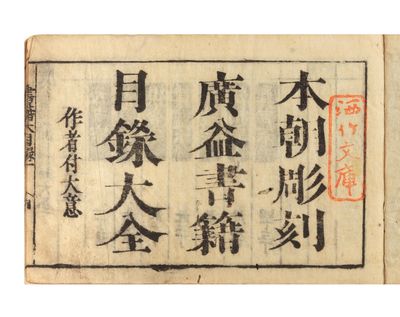 by KOEKI SHOJAKU MOKUROKU TAIZEN
68; 68; 75; 80; 66 folding leaves. Five vols. Oblong 8vo, orig. wrappers (rather tired & rubbed), orig. block-printed title labels on upper covers, new stitching. Kyoto: Yao Ichibei, 1692. An early bibliography of Japanese printed books; essentially a Books in Print, it was the principal guide to the subject for two centuries. "By the middle of the seventeenth century the flood of publications was so great that there was a perceived need for information and guidance, and it was provided by the booksellers' catalogues known as shojaku mokuroku."-Kornicki, The Book in Japan, pp. 176-77. The first printed shojaku mokuroku appeared ca. 1666 and established the standard categories that were followed by many generations of the trade. Editions, with slightly varying titles, continued to be published through the 18th century. While shojaku mokuroku were sold to scholars and bibliographers as reference works, they were primarily intended for the book trade, and that determined their oblong octavo format, which was easy to carry around. The first volume contains Buddhist texts, categorized by sect. Vol. 2 is concerned with Zen, Buddhist, and other religious texts, along with biographies of famous religious figures and dictionaries of religious words. Vol. 3 deals with Confucian texts, military strategy, calendars, and biographies, while the fourth volume describes Shinto texts, medicine, surgery foreign subjects, poetry and prose works. The fifth volume lists books of literature, plays, books for women, music, mathematics, and go play books, cookbooks, books on the tea ceremony and on flower arrangement, travel guides, illustrated books, dance books, tales, erotica, scrolls, etc. There is some bibliographical detail, such as information on author, year of publication, comments from the anonymous editor, size, and whether the text has reading marks. Mary Elizabeth Berry, in her classic Japan in Print, begins her book by describing how an imaginary young bibliophile, about to go to Tokyo on his first book-hunting trip, would, in preparation, consult the "Koeki shojaku mokuroku..., published by a consortium of Kyoto firms in 1692, [which] contains entries on over 7,000 [Moretti's count is 6707] current titles divided into 46 main categories (and numerous subcategories)."-p. 1. Very good set. There is some worming touching text, but all characters are legible. ❧ For a wonderful account and analysis of early Japanese booksellers' catalogues, see Prof. Laura Moretti, "The Japanese Early-Modern Publishing Market Unveiled: A Survey of Edo-Period Booksellers' Catalogues" in East Asian Publishing and Society, Vol. 2 (2012), pp. 199-308. (Inventory #: 7065)
$6,500.00 add to cart or Buy Direct from
Jonathan A. Hill, Bookseller
Share this item
Jonathan A. Hill, Bookseller, Inc.
Offered by