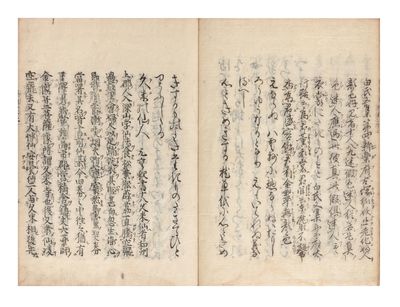 by HAYASHI, Razan
14 parts in 13 vols. Large 8vo, orig. patterned wrappers (rubbed), orig. block-printed title labels on upper covers (rubbed), new stitching. [Japan: 1648-52]. An early and rare edition of this highly influential commentary on the Tsurezuregusa [Notes from Leisure Hours] of Kenko Yoshida (ca. 1282-1350). Yoshida's greatest masterpiece, it is a nonfictional prose work - zuihitsu - containing miscellaneous reflections and observations that continues to be read and loved today. "It can be said that Kenko discovered a couple of centuries before Montaigne that prose was the natural medium for conveying the motions of an inquiring, particularly a self-inquiring, mind. It is, moreover, special to the point of rarity in appealing to young and old alike with a combination of eager tolerance and assuring limitation, beckoning the one and consoling the other."-Miner et al., The Princeton Companion to Classical Japanese Literature p. 54. Hayashi (1583-1657), was an influential Neo-Confucian philosopher, scholar, author, and advisor to the first four shoguns of the Tokugawa era. He established a famous Confucian academy, the Shohei-ko, with a great library, in what is today Ueno. A work of continuing great popularity, the Tsurezuregusa was the most printed classical text of the first half of the 17th century in Japan. Razan's commentary was written in 1621. In it, he made the author, Kenko, appear as a hero for the times. "Its didactic tenor had an impact on later commentaries, other works that sought inspiration in Tsurezuregusa, and even fictional biographies of Kenko when those began to appear...But for Razan and the early Edo Neo-Confucianists in general, literature only has meaning when it is made useful in everyday life, and brought in line with the study of real things. Any such utility in women's writings is overshadowed by latent female faults. There are statements and implications in Tsurezuregusa that disturb Razan, it is true, but he finds he can work around them. In his struggle to make the text a vehicle for spreading Neo-Confucian teachings, Razan does not necessarily hide or excise the contradictions in the text, but he does mold and pad it, as he says 'bringing in the words of the Confucian classics, using Japanese proverbs to explain things, writing in syllabary' (as opposed to characters), in a way that even he characterizes as 'cutting up a chicken with a knife meant for beef.' The vernacular fowl in and of itself is of less consequence than the philosophical steer."-Linda H. Chance, "Constructing the Classic: Tsurezuregusa in Tokugawa Readings" in Journal of the American Oriental Society, Vol. 117, No. 1 (Jan.-Mar. 1997), pp. 39-56. The book is printed in a beautiful mixture of kanji, hiragana, and katakana. Our copy contains the author's preface in kanbun (like the incomplete LC set, which they date as 1648-52). A fine set. Minor staining and worming. Preserved in a chitsu. (Inventory #: 7068)
$12,500.00 add to cart or Buy Direct from
Jonathan A. Hill, Bookseller
Share this item
Jonathan A. Hill, Bookseller, Inc.
Offered by