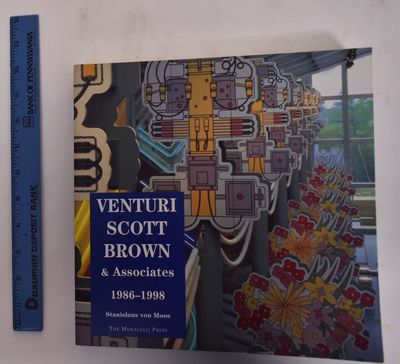 by Von Moos, Staislaus
New York: Monacelli Press, 1999. Softcover. VG- (light foxing to upper block). Blue and color-illustrated wraps with white lettering. 367 pp. Color and BW illustrations. The architectural partnership of Robert Venturi and Denise Scott Brown has long been known for its preeminent position in the theory and practice of architecture. Their writings, including Complexity and Contradiction in Architecture and Learning from Los Vegas, have profoundly directed architectural thought in the twentieth century. The firm's built work - in its creative understanding of history and the everday environment, its emphasis on multiculturalism and multimedia, and especially its considerationof iconography versus abstraction - has been equally influential. This comprehensive monograph on Venturi, Scott Brown & Associates includes more than eighty buildings and projects: urban plans and development studies; important civic buildings such as the Sainsbury Wing of London's National Gallery; and a great number of projects at universities across the United States. Also presented are spectacular renovations for the Frank Furness library building at the University of Pennsylvania and Harvard's Memorial Hall and designs for houses, exhibitions, fabrics, furniture, and decorative items. The catalog, written by the architects, focuses on important aspects of their practice in the late 1980s and the 1990s, notably the juxtaposition of a "hype" sensibility in decoration - manifested in large-scale LED signs and colorful supergraphics - and a generic architecture. The introductory essay, by Stanislaus von Moos, discusses five major themes in Venturi and Scott Brown's architecture: its dialogue with their hometown, Philadelphia, as both a national shrine and a center of architectural innovation; the importance of the American campus as a model for planning and design; organicism as a source of their design theory; the role of realism and abstraction in the firm's architecture; and the Venturis' recent interest in Japan and its traditions. Finally, in an interview conducted by von Moos and Mary McLeod, the architects comment on Las Vegas today, the role of feminism and mannerism in architecture, and the importance of the ordinary. -Jacket. (Inventory #: 176611)
$30.00 add to cart or Buy Direct from Mullen Books
Share this item