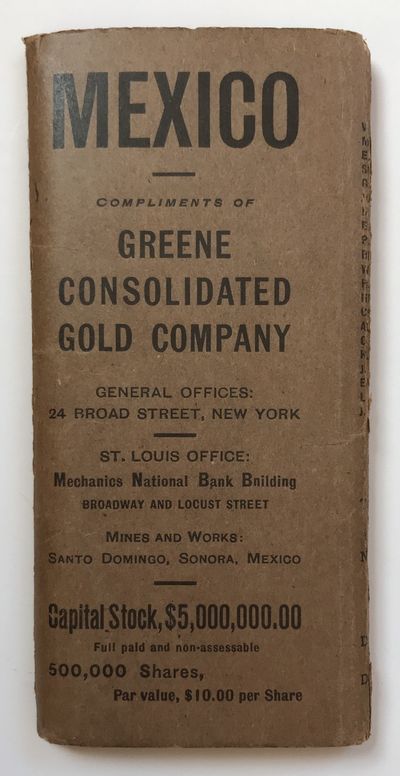 by [Mexico]. Greene Consolidated Gold Company
Chicago: Rand McNally, 1904. About very good.. Folding map, approximately 21 x 27.5 inches. Original, wallet-style printed wrappers. Light wear to wraps; a few short separations along fold lines. Light tanning. Uncommon cartographic promotional for this early 20th-century mining company with operations near Cananea and Magdalena in the Northern Mexican state of Sonora. The Rand McNally map is overprinted in red to show the locations of Greene Consolidated Gold Company properties, as well as major railroad lines across the country. A special inset, titled, "Topographical Map of the Eastern Portion of the State of Sonora, Showing the Operating and Projected Railways with Relation to the Property of the Grene Consolidated Gold Co. and Other Important Mining Districts," provides a magnified view of the region where the company operated, and also shows other significant commercial mining ventures in this part of Sonora, as well as planned railroad construction in the area. A brief promotional text and additional information about the business are printed on the wrappers, which also incorporate a tear-off order form for stock in the company. (Inventory #: 1269)
$375.00 add to cart Available from
McBride Rare Books
Share this item