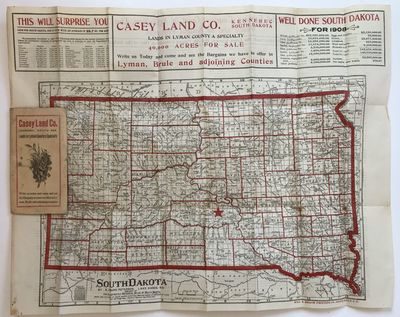 by [South Dakota]. Casey Land Co
Sioux Falls: Will A. Beach Printing Co, 1909. About very good.. Folding map, approximately 17 x 21.5 inches. 18mo. Original printed wrappers. Light wear and soiling to wraps. A few short separations at fold point, one slightly longer from top edge. Light tanning. Unrecorded map and promotional for lands in central South Dakota counties, south of Pierre, available from the Casey Land Company in Kennebec, South Dakota, during the late 1900s. "40,000 Acres for Sale, Write Us Today and Come and See the Bargains We Have to Offer in Lyman, Brule and Adjoining Counties." A county map of South Dakota by Ferank Peterson, with state and individual counties outlines in red and Kennebec noted with a large star, and two insets with agricultural statistics are printed on the recto of the sheet. A lengthy promotional text advertising the myriad opportunities and advantages to business and life in early 20th-century South Dakota is printed on the verso. "South Dakota is probably the least advertised; the least known; but all things considered, one of the richest and best states of the Union." We locate a copy of one other Casey Land Co. promotional, a 1910 map of Potter County, at Yale; the present work not in OCLC. (Inventory #: 1276)
$500.00 add to cart or Buy Direct from
McBride Rare Books
Share this item

Constitution and By-laws of the Colored Association of Louisiana Incorporated

Negro Legislators of Texas and Their Descendants. A History of the Negro in Texas Politics from Reconstruction to Disenfranchisement

Dallas : Mathis Publishing Co , 1935
(click for more details about Negro Legislators of Texas and Their Descendants. A History of the Negro in Texas Politics from Reconstruction to Disenfranchisement)
View all from this seller>