Subdivisions One and Two of the Riverside Orange Heights Tract Adjoining Corona, California 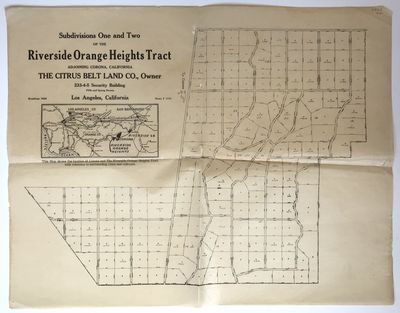 by [California]. [Real Estate]
Los Angeles, 1910. Good plus.. Plat map, approximately 14 x inches. Folded, a couple of short separations and minor losses along or near folds. A few nicks at edges. Light, even tanning. Printed on thin paper. Ephemeral real estate map and advertisement for the Riverside Orange Heights Tract, located north of Corona in Southern California, and owned by the Citrus Belt Land Company. "The land west of the future Norco Hills, consisting of 5,500 of the former Little La Sierra Rancho, was purchased by a company of Los Angeles men led by James W. Long, and by April 1909, that same property was on the market in the form of five-, ten-, and twenty-acre parcels under the 'Riverside Orange Heights.' In 1910, the Riverside Orange Heights Company was again 'sold' to the Citrus Best Land Company, with Long and many of the same stakeholders simply moving from the old corporation to the new.... The Citrus Belt Land Company undertook an aggressive sales campaign to sell residential ranch parcels strictly as a suburb of Corona, with no effort to build schools, commercial businesses, or manufacturing centers. Newspaper ads appearing in the local papers, the Los Angeles Times and as far away as San Diego touted the plentiful and inexpensive water, excellent soil, and citrus growing opportunities. It was claimed that the land was impervious to flooding and frost and provided a natural shield from the Santa Ana winds -- statements that many future residents would find to be devastatingly untrue" - Bash. The platted area depicted in this map represents today the southern portion of Norco, bisected by Interstate 15. A good cartographic and promotional document of real estate development in the country surrounding Los Angeles during the early 20th century. We locate only one copy, at UC San Diego.Kevin Bash, "A Brief History of Norco," Charleston: History Press, 2013. (Inventory #: 1275)
$450.00 add to cart Available from
McBride Rare Books
Share this item