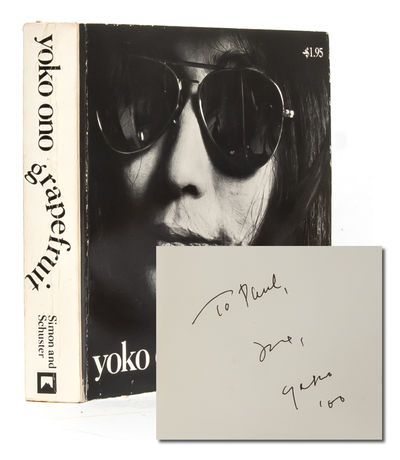 by Ono, Yoko
New York: A Touchstone Book published by Simon & Schuster, 1971. First Thus. Near Fine. The first Touchstone paperback edition of Yoko Ono's illustrated book, after the exceedingly rare 1964 first edition, of which only 500 copies were printed in Tokyo. Inscribed on the front endpaper "To Paul, Love Yoko Ono." In just about Fine condition, with only the slightest bit of edgewear and some creasing near the front joint. Internally clean and unmarked.

"The original Grapefruit is split into five sections - Music, Painting, Event, Poetry, Object -- with each page offering a conceptual direction for work yet to be created...After Ono married John Lennon, Simon & Schuster published a new edition of Grapefruit, though this version included some editorial revisions and additions -- the most prominent among the latter being a short foreword authored by Lennon" (The New Yorker). This artist's book earned and has maintained fame as an early example of conceptual art, making her a predecessor to men like Kosuth and Weiner, who popularized the approach. A lovely copy, inscribed mysteriously to "Paul" (we assume not McCartney). Near Fine. (Inventory #: 3404)
$2,500.00 add to cart or Buy Direct from
Whitmore Rare Books
Share this item

London : Cassell and Co. Ltd , 1954
(click for more details about The Second World War (Finely bound in 6 volumes))
View all from this seller>