Fine portrait engraving by B. Hunt after E. Walker 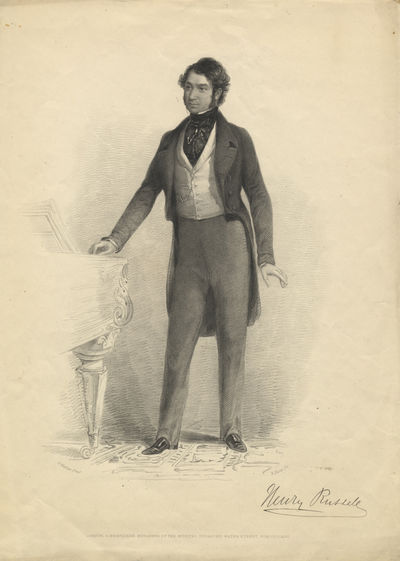 "[He] claimed to have written the music for over 800 songs. A more realistic figure is perhaps 300, including 80 or so written in the United States, many of his melodies being reissued with new lyrics and titles ... Among the most popular were the sentimental "The Old Arm Chair" and the melodramatic "Woodman! Spare That Tree!" He also composed rousing songs about traveling on land or sea, and several descriptive multi-sectional pieces, similar in style and emotional content to Italian operatic scenes. Some of Russell's songs were written as statements for social reform; these include "The Maniac" concerning the "barbarous" conditions of private mental institutions, "The Gambler's Wife" on the plight of a deserted mother and child, and "The Indian Hunter" on racial intolerance." John A. Stephens, William McClellan and Andrew Lamb in Grove Music Online. (Inventory #: 33493)
$330.00 add to cart or Buy Direct from
J. & J. Lubrano Music Antiquarians
Share this item