Engraving by W. Roffe after F. Roffe of the bust by J. Durham 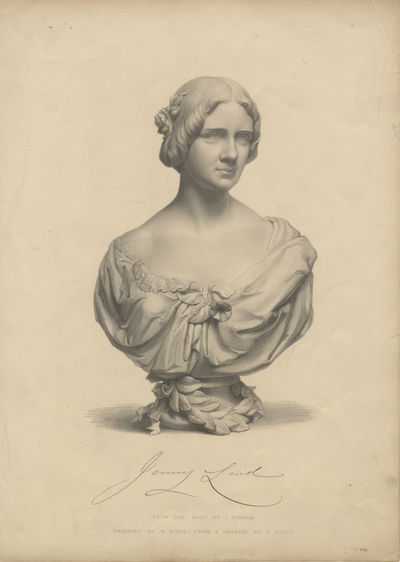 Slightly worn, browned, and creased. Dubbed "The Swedish Nightingale," Lind debuted in 1838 as Agathe in Der Freischütz. "[She] made her Viennese début at the Theater an der Wien in April 1846 as Norma. She then toured extensively in Germany, taking part, with Mendelssohn, in the Lower Rhine Festival at Aachen during May and June, when she sang in Haydn's Creation and Handel's Alexander's Feast. She also appeared at Munich, Stuttgart, Karlsruhe, Mannheim and Nuremberg. Returning in January 1847 to Vienna, she scored an immense success as Marie. Her triumphant London début was at Her Majesty's in May of the same year, when she sang (in Italian) Alice in Robert le diable before Queen Victoria and Prince Albert, followed by La sonnambula ... and La fille du régiment with even greater success." Elizabeth Forbes in Grove Music Online. (Inventory #: 33494)
$316.00 add to cart or Buy Direct from
J & J Lubrano Music Antiquarians
Share this item