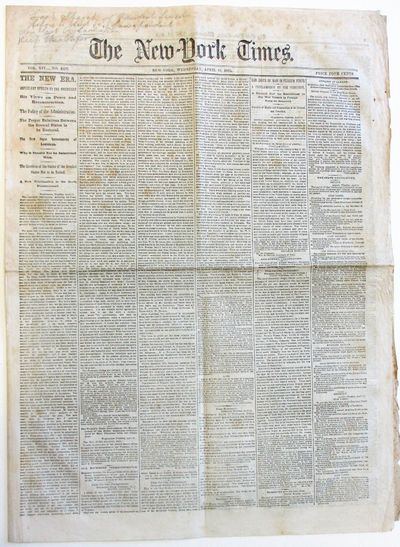 This was Lincoln's "Last Public Address" [Abraham Lincoln Online]. This issue of the Times, appearing the following day, is surely a candidate for its earliest printing. His Speech discloses Lincoln's most recent thoughts on Reconstruction, the War having virtually ended by the surrender of Lee's Army at Appomattox Court House on April 9. Reconstruction, he says, is "fraught with great difficulty... We simply must begin with, and mould from, disorganized and discordant elements. Nor is it a small additional embarrassment that we, the loyal people, differ among ourselves as to the mode, manner, and means of reconstruction."
Lincoln emphasizes his flexibility. He disclaims any intention to insist upon a single comprehensive plan. He makes clear that "the Executive claimed no right to say when, or whether members should be admitted to seats in Congress" from the rebellious States. He remarks that he has never pronounced on the interesting legal question, "whether the seceding States, so called, are in the Union or out of it." Such an issue has no practical significance. "We all agree that the seceded States, so called, are out of their proper relation with the Union; and that the sole object of the government, civil and military, in regard to those States is to again get them into that proper practical relation." Lincoln will act as circumstances require, the only criterion being whether the proposed policy will expedite that "proper practical relation." It is obvious that Lincoln, had he lived, would have been much more successful than his dogmatic and inflexible successor at guiding Reconstruction.
This issue treats many other issues arising from the War's end, including the topic, "What shall be done with Jeff. Davis? (Inventory #: 36639)
$1,000.00 add to cart or Buy Direct from
David M. Lesser, Fine Antiquarian
Share this item
David M. Lesser, Fine Antiquarian Books LLC
Offered by