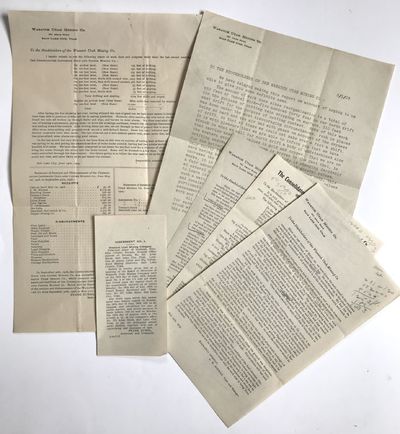 by [Utah]. [Mining]
[Salt Lake City, 1909. About very good.. Six sheets, varying sizes. Previously folded. Minor wear and light tanning. Scattered manuscript notations. A small group of ephemeral reports for two early 20th-century Utah mining companies, the Consolidated Jefferson Gold and Copper Mining Company, which was subsumed into the Wasatch Utah Mining Company at the end of 1908. Present here are the final annual report from 1908 for Consolidated Jefferson, a 1909 report to Wasatch shareholders concerning development and revenue from the Jefferson mines after their acquisition. Also included in the group are two copies of two progress reports to Wasatch investors, one typed and dated March 1, 1909, and the other printed and dated May 14 of the same year, as well as one small printed notice of an assessment on stockholders to occur on June 1, 1909. The holdings of both companies were near Alta in the Wasatch Range east of Salt Lake City. (Inventory #: 1267)
$175.00 add to cart Available from
McBride Rare Books
Share this item