An American Dilemma: The Negro Problem and Modern Democracy 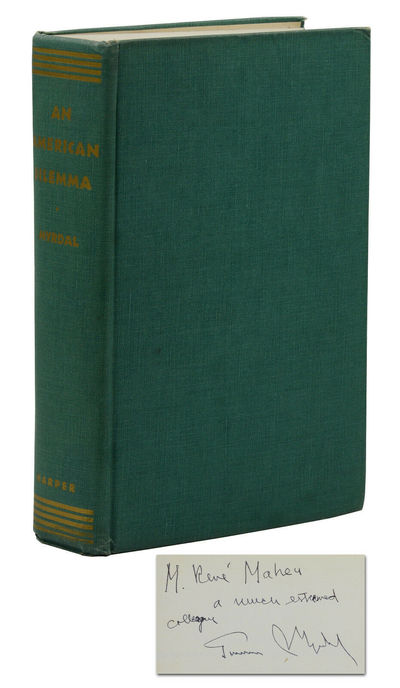 by Myrdal, Gunnar; Richard Sterner; Arnold Rose; Ralph Bunche
New York: Harper & Brothers, Publishers, 1946. Near Fine. Signed by Gunnar Myrdal on front free endpaper, inscribed to French philosopher Rene Maheu, UNESCO Chief, Division of Free Flow of Information, later Director of the organization. lix, [1], 1483 pp. Ninth edition, the single volume edition first published in 1944. A Near Fine copy lacking the dust jacket, a little shelf worn. Rare signed. This work, though somewhat obscure today, was the culminating achievement of Swedish economist and sociologist Gunnar Myrdal's life. It was commissioned by the Carnegie Corporation of New York to study American history and society in hopes of providing answers to what was then commonly called "the negro problem," a stark divide in an openly segregated sociological, political, and economic system. The book was widely read and cited, including in the landmark Brown v. Board of Education Supreme Court decision of 1954 that desegregated public schools. (Inventory #: 140939758)
$1,400.00 add to cart Available from
Burnside Rare Books
Share this item
Burnside Rare Books
Offered by

New York : New Directions , 1949
(click for more details about Seeds of Contemplation)
View all from this seller>