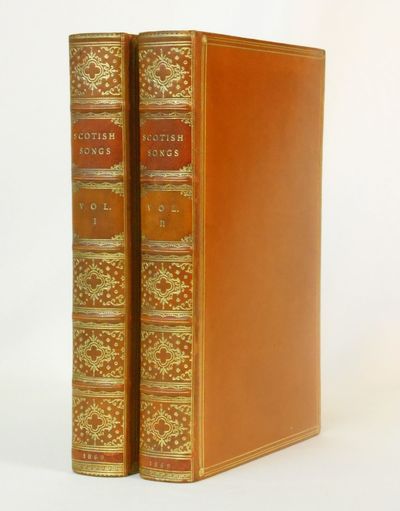 by [Ritson, Joseph - Editor]
Glasgow: Hugh Hopkins, 1869. Second Edition. Hardcover. Near fine. Two volumes (complete), octavo size, 587 pp. Joseph Ritson (1752-1803) was an interesting and, even for his day, unusual man. Described by the DNB as an "antiquarian"; at the age of 20, upon reading the "Fable of the Bees" he decided to "forswear all animal foods, and to subsist solely on milk and vegetables." By trade a "conveyancer", he studied law and became a barrister, employing his leisure time as a writer. Never one to run from an argument, in 1784 he took issue with a publication of "Select Scotish Ballads" by one John Pinkerton, claiming they were modern forgeries - which indeed turned out to be the case. Ritson went on to publish, in 1785, "The Caledonian Muse: a Chronological Selection of Scottish Poetry from the earliest times", and later, after a walking tour through Scotland, publishing in 1794 two volumes of "Scotish Song with the genuine Music".

This two-volume set the second edition, published in 1869 in Glasgow; per the short introduction by the publisher, "The First Edition of 'Ritson's Scotish Songs' was published in 1794, and the number of copies printed does not seem to have been great, as for many years the work as been very scarce. This, and the fact that it is almost the only one of Ritson's works that has not been reprinted, has induced the Publisher to issue this, the Second Edition" (p. v). While most of us today spell the work "Scottish" with two "t"s, the publisher was careful to point out in a footnote to the Preface on page 1: "The word Scottish is an improper orthograph of Scotish; Scotch is still more corrupt; and Scots (as an adjective) a national barbarism; which is observed here once for all, to prevent the imputation of inconsistency and confusion, as a direct quotation should be always literal."

___DESCRIPTION: Both volumes bound in full tan leather, triple narrow gilt ruled borders on both boards with a small ornament at the corners, spines with six compartments, four richly decorated in gilt, two with the title and volume number, date of publication at the tail of the spines, board edges and turn-ins decorated with gilt, top edges gilt, marbled endpapers, half-titles in red and black, frontis in Volume I a tissue-guarded engraving of a likeness of Ritson with a facsimile signature beneath, frontis in Volume II a tissue-guarded small steel-engraving, title pages in red and black with small armorial illustration, five additional small steel-engraved illustrations throughout, steel-engraved chapter headpieces, musical scores scattered throughout (although many songs giving only the verses); octavo size (8 1/8" by 5 1/4"), pagination: Volume I, [i-vi] [1] 2-288; Volume II, [i-vi] 289-575.

___CONDITION: Overall near fine, the leather bindings smooth and supple, the corners straight with a miniscule amount of rubbing to a few, the text blocks strong and square with all hinges solid, the interiors clean and bright, collated complete with a total of seven steel engravings, and the set entirely free of prior owner markings; the binding on the first volume with a light stain on the back board (not damp), the binding on the second volume with some sunning at the top two inches of the back board, a few spots of light rubbing to the joints, and offsetting to the free endpapers from the turn-ins. Still a near fine set of an interesting work on old Scotish ballads and songs.

___Swan's Fine Books is pleased to be a member of the ABAA, ILAB, and IOBA and we stand behind every book we sell. Please contact us with any questions you may have, we are here to help. (Inventory #: PTBR005)
$440.00 add to cart or Buy Direct from
Swan's Fine Books
Share this item