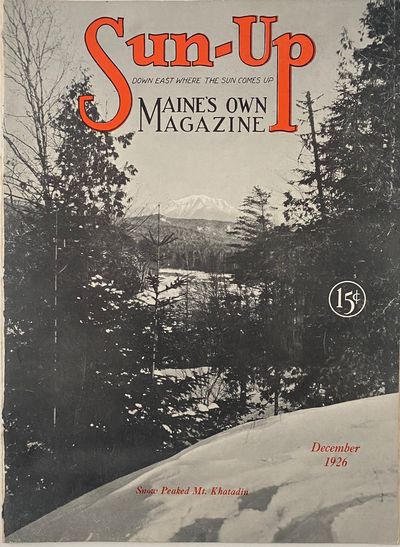 by GATES, Virginia L., editor
Portland, Maine: Wood-Gate Publishing Co, 1926. Sewn binding. Near fine. 4to; 32pp; stiff b&w pictorial wrapper with orange accents; sewn binding; b&w illustrations throughout text and advertisements; scuffing to spine fold, binding holding but pulling on wrapper; near fine. WorldCat holds the volumes in 6 of its libraries. Periodical devoted to the promotion of the state of Maine to both travelers and residents. Wonderful advertisements from across the state. Cover of this issue features a photo of "Snow Peaked Mt. Khatadin". Contents include information on Maine's 27,000 Horsepower Hydroelectric Development, the Rights of Nature, Maine Women in the Light of Civic Affairs, Maine's Only Dramatic Producing Organization, Ole Bull and His Maine Estates, The Personality Behind the $3 Million Dollar Bath Bridge, and Architectural Feature, Augusta the Capital City, Aroostook Valley Fish and Game Club, The New England Sportsmen's Show, and more. (Inventory #: 894)
$40.00 add to cart Available from
Sandra L. Hoekstra
Share this item

The Little Keepsake: or Easy Lessons, in Words of One Syllable

New Haven : S. Babcock , 1835
(click for more details about The Little Keepsake: or Easy Lessons, in Words of One Syllable)

The Flock of Sheep; or Familiar Explanations of Simple Facts

New Haven : Printed and Published by S. [Sidney] Babcock` , 1840
(click for more details about The Flock of Sheep; or Familiar Explanations of Simple Facts)
View all from this seller>