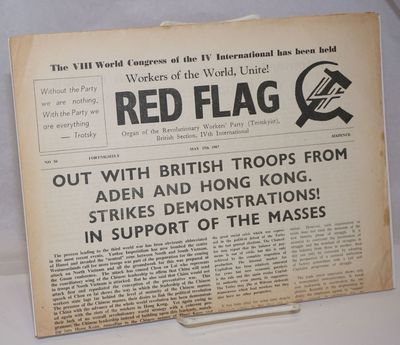 London: Revolutionary Workers Party (Trotskyist), 1967. Four-page issue of the biweekly newspaper, tabloid format, paper toned, a couple closed edge tears else good condition. Publication of the followers of Argentinean Trotskyist J Posadas (Homero Rómulo Cristalli Frasnelli), one of the most interesting figures in the Trotskyist movement - known both for his call for a Soviet-Chinese first strike against the US with nuclear weapons (hence his lack of a serious US following) and for his ideas about calling on extraterrestrials to aid revolution on earth. This issue includes a piece by Posadas about the elections in France, a call for the withdrawal of British troops from Hong Kong and Aden, and more - alas, nothing about Comrade E.T. (Inventory #: 251144)
$20.00 add to cart or Buy Direct from Bolerium Books
Share this item