The Long Christmas Dinner & Other Plays in One Act [*SIGNED*] 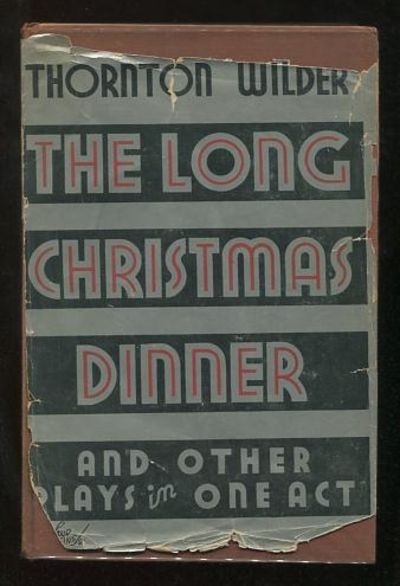 by Wilder, Thornton
New York/New Haven: Coward-McCann/Yale University Press. Good+ in Poor dj. 1931. First Edition. Hardcover. [book is shelfworn, slight fraying to cloth at top of spine; the jacket is a real mess, in three pieces (held together, albeit not very well, by a new mylar jacket cover) with extensive chipping, most of the spine missing, etc.]. INSCRIBED by the author on the on the ffep: "For Elsa Lanchester / and Charles Laughton / with the admiration and / friendship of / Thornton Wilder / University of / Chicago / December 1931." Six short plays, one of which, "Pullman Car Hiawatha," is a sort of precursor to Wilder's classic "Our Town": a "Stage Manager" introduces and narrates the action, which takes place on a train traveling from New York to Chicago (depicted only with chairs on an almost-bare stage), passing at one point through Grover's Corners, Ohio. The inscription can be accounted for, at least temporally and geographically, by the fact that Laughton and Lanchester were in Chicago in December 1931, on the road with the play "Payment Deferred," in which they had made their American stage debuts in September (following the play's London run); Wilder, already a Pulitzer Prize winner for his 1927 novel "The Bridge of San Luis Rey," was on the faculty of the University of Chicago from 1930 to 1937, and as a literary celebrity would certainly have been in a position to meet Charles and Elsa, quite likely at some social function. The association, such as it is, is a little harder to suss out: although the "admiration and friendship" inscription hints at something more than a casual meet-and-greet, I've been unable to document any professional collaboration between Wilder and either Laughton or Lanchester. . (Inventory #: 25472)
$200.00 add to cart Available from ReadInk
Share this item
ReadInk
Offered by

New York : Carrick & Evans, Inc. , (c.1940)
(click for more details about Murder Without Clues)
View all from this seller>