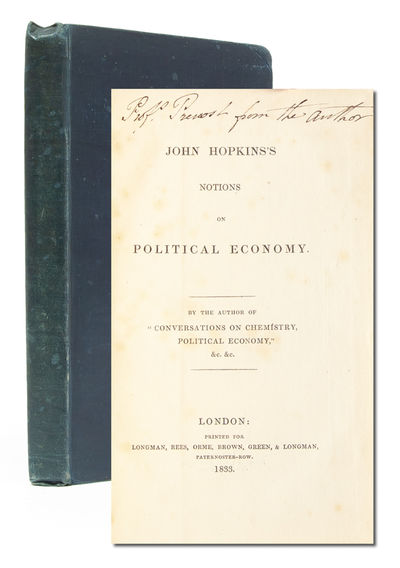 by [Marcet, Jane] The author of Conversations on Chemistry, Political Economy, &c
London: Longman, Rees, Orme, Brown, Greene & Longman, 1833. First edition. Near Fine. Publisher's cloth binding retaining the delicate paper label to front board. Some bumping to corners and faint spotting to boards, but a pleasing, square copy in all. Internally a clean, with just a bit of scattered foxing to endpapers and preliminaries. Scarce on the market, this book documents Marcet's efforts to expand knowledge access to the working classes in order to make political self-advocacy possible. Presented by Marcet to Professor Pierre Prevost, the philosopher and physicist best known for his experiment on the body's radiation of heat, this copy bears his ownership signature on the front endpaper and an inscription from Marcet at the header of the title: "Prof. Prevost from the Author."

A peer of such feminist thinkers as Maria Edgeworth, Marcet is considered one of the most important figures in the history of women's education in science and economics. Her "Conversations" books, which include texts on politics, economics, and science, were ranked among the best-known educational texts of the nineteenth century. In addition to making these rigorous fields accessible to women who might otherwise be denied such training, they also welcomed in young boys whose access to quality education might be hindered by class. Among her most famous readers was Michael Faraday, who encountered her books while serving as a bookbinder's apprentice and was inspired to delve more deeply into the sciences (Science History Institute). The present work seeks to popularize economic theory and put forward an argument for decreasing wage gaps among rich and poor; and in line with her overall project, Marcet seeks to make her argument accessible to readers of all education levels. Wrapped in allegory in order to welcome in labor-class readers who may not have complex economic vocabularies, Marcet's tale posits the need for new economic policy into a series of nine allegorical essays, told "through the eyes of honest John Hopkins, a laborer on low wages" (Liberty). Scholars have increasingly viewed John Hopkins as an important and previously undervalued piece of Marcet's oeuvre; and her desire to bring the working class into dialogue about their own economic state signals an important cultural change. "Marcet was engaged in the work of the knowledge broker -- creating and maintaining networks between and among scientists and the larger public. Knowledge sharing was based upon the personal and social connections she facilitated by bringing together bankers, scientists, and professional economists such as Malthus, Ricardo, Mill and others. It was extended to the popular culture through the many editions of her Conversations addressed to the middle classes, and enlarged to include the working classes with her John Hopkins's Notions on Political Economy" (L. Forget). Lesser known but nonetheless one of Marcet's culturally important contributions, this volume contains important lessons on how to expand a class's knowledge base and provide the tools for political and economic self-advocacy. Notably this copy reveals the influential scientific communities she participated in, connecting her to men in the hard sciences who knew of and read her work.