The Soundscape of Modernity: Architectural Acoustics and the Culture of Listening in America, 1900-1933 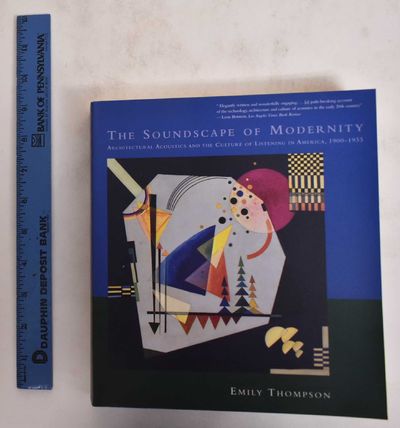 by Thompson, Emily
Cambridge, MA: MIT, 2004. Softcover. VG. Blue and green wraps with color illustration on front, gray and white lettering, ix, 500 pp, bw illustrations. "In this history of aural culture in early-twentieth-century America, Emily Thompson charts dramatic transformations in what people heard and how they listened. What they heard was a new kind of sound that was the product of modern technology. They listened as newly critical consumers of aural commodities. By examining the technologies that produced this sound, as well as the culture that enthusiastically consumed it, Thompson recovers a lost dimension of the Machine Age and deepens our understanding of the experience of change that characterized the era. Reverberation equations, sound meters, microphones, and acoustical tiles were deployed in places as varied as Boston's Symphony Hall, New York's office skyscrapers, and the soundstages of Hollywood. The control provided by these technologies, however, was applied in ways that denied the particularity of place, and the diverse spaces of modern America began to sound alike as a universal new sound predominated. Although this sound--clear, direct, efficient, and nonreverberant--had little to say about the physical spaces in which it was produced, it speaks volumes about the culture that created it. By listening to it, Thompson constructs a compelling new account of the experience of modernity in America." -rear of book. (Inventory #: 176717)
$30.00 add to cart or Buy Direct from Mullen Books
Share this item