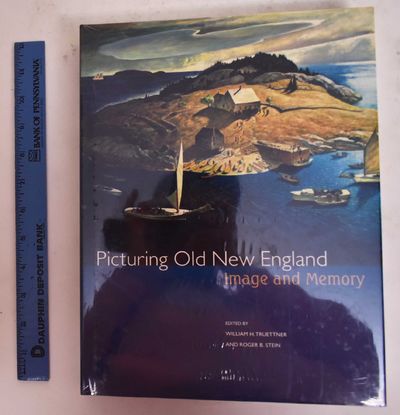 by Truettner, William H. and Roger B. Stein
Washington, D.C./New Haven, Connecticut: Smithsonian Institution/ Yale University Press, 1999. Hardcover. As new in shrinkwrap. Navy boards, teal dust jacket with color illustrations on front and rear, xv, 239 pages, richly illustrated in bw and color. "When we think of New England, we envision village greens surrounded by neat, white-framed houses; tall elms and church spires; country stores; Yankee farmers; sailing ships; rocky coastlines; brilliant autumn foliage. Despite the fact that there is a New England of cities, factories, and an increasingly diverse ethnic population, it is the Old New England that Americans have always treasured, finding in it a kind of "national memory bank". This beautiful book examines images of Old New England created between 1865 and 1945, demonstrating how these images encoded the values of age and tradition to a nation facing complex cultural issues during the period. The book begins with an introduction by Dona Brown and Stephen Nissenbaum that provides a historical background to the era. Then William Truettner, Roger Stein, and Bruce Robertson turn more directly to New England images and discuss a variety of artistic efforts to historicize the past. They show that paintings of the Revolutionary War, of harvest scenes, or of genteel old New England towns served, for example, to provide reassurance to urban dwellers after the Civil War, to counteract the effects of modernism, and to encourage a sense of community during the Depression. They also examine paintings of coastal New England and favorite haunts of tourists and artists such as Winslow Homer and Marsden Hartley. The many images of Old New England, say the authors, represent shared cultural beliefs -- ways of seeing the present in terms of a mythical past." - book jacket description "Published on the occasion of the exhibition Picturing Old New England : Image and memory, organized by the National Museum of American Art, Smithsonian Institution, and shown at National Museum of American Art, Smithsonian Institution, Washington, D.C., April 2-August 22, 1999"--Title page verso. Includes bibliographical references (pages 230-235) and index. (Inventory #: 176703)
$50.00 add to cart or Buy Direct from Mullen Books
Share this item