“The Restriction Act Knocked Out,” The Wasp. 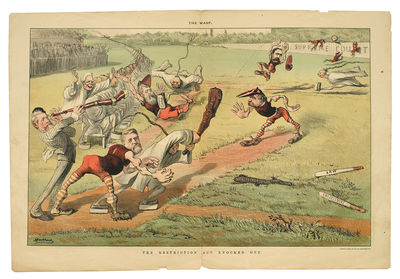 by Barkhaus, Henry [illus.].
San Francisco: Schmidt Label & Litho Co., The Wasp, Aug. 15, 1885 Folio 13 3/4 x20 1/4”, pp. 7-10, two-page color lithograph 11 1/2 x 18 1/8”, text to verso. small tear along center fold, chipping and foxing to edges; very good. § From the original edition of this issue of The Wasp. The Supreme Court’s decision in Chew Heong drew criticism from exclusionists, and it became difficult to enforce the exclusion law. Henry Barkhaus’s cartoon illustrates the failing efforts of several key federal officials in San Francisco in preventing Chinese immigrants from landing through litigation. The cartoon uses a satirical baseball game in which the Chinese are clearly winning to make its point. Political cartoons such as these provided one of the more effective vehicles for the anti-Chinese movement. The Wasp was well known for it’s satirical cartoons. (Inventory #: 108161)
$125.00 add to cart or Buy Direct from
John Windle, Bookseller
Share this item