The Romance of Dirt; Being an exposition on the adventures of a Knight of the Soil 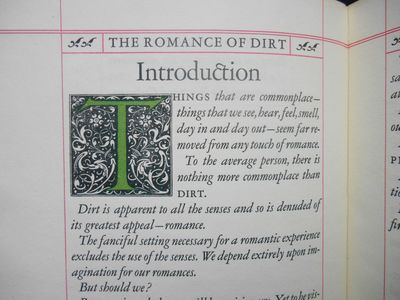 by Coburn, Richard
[San Francisco]: [Printed by John Henry Nash for John Vaughan], 1924. Limited Edition. Hardcover. Very good. One of 500 copies, unnumbered, quarto size, 14 pp. A "tale" wherein the development of empty land into houses and neighborhoods is told; several LA-area neighborhoods are mentioned, including Wilshire Vista (founded in 1921), Beverly Vista, and Fairfax-Melrose. This "tale" would have appealed to many who at the time were involved in the booming Los Angeles housing industry; as set forth in one section: "...[the] 'Romance of Dirt' had become an actual reality & not a mere matter of present decision. As such, he saw what romance really is - a vision of possibilities fabricated info facts. His vision was of many gardens bearing many blossoms."

___PROVENANCE: From the library of F.C. van Deinse (b. 1876), resident of Pasadena (whose house, designed by Wallace Neff, was featured in the January 1925 issue of Architectural Digest), a member of the California State Mining Board, at times the General Manager, Yuba Consolidated Goldfields, and President, Gold Producers of California, San Francisco; mentioned in the 1924 issue of Mining and Oil Bulletin, at the time van Deinse was the General Manager, Ventura Consolidated Oil Fields.

___DESCRIPTION: Rust-red linen shelfback with rose-patterned paper over boards, paper spine label with black lettering, endpapers with a narrow red double-ruled border near the top margin, all other pages with both horizontal and vertical red ruled borders, ownership stamp of F.C. van Deinse on the front free endpaper, six seven-line rubicated intial capitals in green and black at the Introduction and each of the five chapters; Garamond roman and italic type, Kelmscott paper, quarto size (11" by 7 5/8"), unpaginated with seven printed leaves, one of 500 copies, unnumbered.

___CONDITION: A solid very good copy, the paper boards clean, the linen shelfback with just a bare minimum of rubbing at the head and tail of the spine, the paper spine label unrubbed and firmly attached, straight corners, a strong text block with solid hinges, the interior is clean and bright, and other than the ownership stamp of Mr. van Deinse as set forth above, entirely free of prior owner markings; some overall rubbing to the board edges, corners somewhat rubbed, and a few light scratchs to the paper boards.

___Swan's Fine Books is pleased to be a member of the ABAA, ILAB, and IOBA and we stand behind every book we sell. Please contact us with any questions you may have, we are here to help. (Inventory #: 20033101)
$275.00 add to cart or Buy Direct from
Swan's Fine Books
Share this item

Speciman Book and Catalogue, 1923; Dedicated to the Typographic Art

The Temptation of Saint Anthony

(Kentfield, California) : The Allen Press , 1974
(click for more details about The Temptation of Saint Anthony)
View all from this seller>