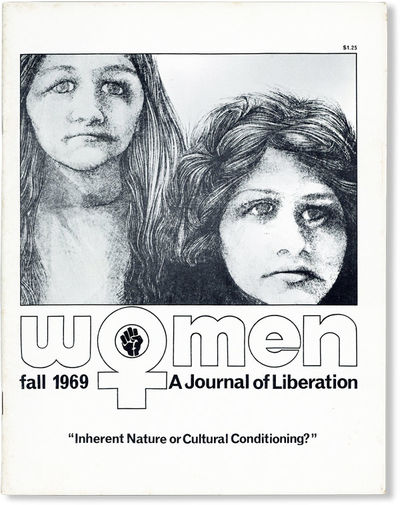 by [WOMEN]
Baltimore: Women: A Journal of Liberation, Inc, 1969. First Edition. Quarto (28cm); illustrated card wrappers, stapled; 64pp; illus. Light wear and foxing to extremities, else Very Good + to Near Fine. Premiere issue of this key journal, the first national publication of the second wave women's movement. The journal was founded in Baltimore, MD, by four women - Dee Ann Mims, Donna Keck, Vicki Pollard, and Carmen Arbona - with the goal of providing a forum for opinions and expression that were essential to the burgeoning women's movement. The journal was managed by a collective, with each issue focussing on a different theme. The publication ran from 1969-1983, ultimately folding due to reduced readership and financial stress. Contents include contributions by Dee Ann Pappas, Roxanne Dunbar, Donna Keck, Janet Russo, Peggy White, Sheila Michaels, and others. (Inventory #: 48862)
$50.00 add to cart or Buy Direct from
Lorne Bair Rare Books
Share this item

A Journey in the Back Country

New York : Mason Brothers , 1860
(click for more details about A Journey in the Back Country)

Northport, AL : The Seajay Press , 1984
(click for more details about Rab and Dab)
View all from this seller>