Something new, comprising a new and perfect alphabet containing 40 distinct characters, calculated to illustrate all the various sounds of the human voice; and showing ... how a new and perfect orthography may be substituted for the present erroneous and tedious system of instruction: designed also to facilitate the acquisition of any foreign language, by furnishing a graphic representation of the simple elements of all words; and thus removing all uncertainty of pronunciation .. 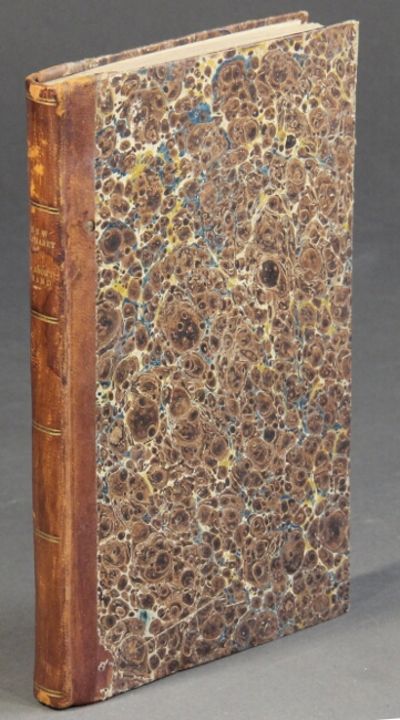 by Barton, Michael H.
Boston: sold by Marsh, Capen & Lyon - Boston. S. Blanchard. and H. Winchester. Harvard, Mass, 1833. 8vo, pp. [4], 104, 97-104, [1], 114-176, [4], 177-184; contemporary quarter sheep over marbled boards, gilt-lettered direct on gilt-paneled spine; generally a fine copy of a rare book. Some of the contents are evidently taken, without change in numbering of pages, from the serial issues of Something New, published by Barton. First issued serially, consisting of series 1, no. 1 (February 1830); and series 2 nos. 1-12 (April 1830 - October 1832). Series 1, no. 1 for February was not included in this collected edition. OCLC locates the AAS, Columbia, LC & Michigan copies. American Imprints 17680. Richmond 1324: "An almost unknown magazine published by Michael H. Brown, February 1830 through October 1832 (No. 1; s. 2, Nos. 1-12) and printed by Brother Simon Blanchard of the Harvard, Mass. Shaker community, February-October 1832 (s. 2, Nos. 5-12). It was devoted to improving and perfecting 'the orthography of the English language by substituting an alphabet, in place of the present one, which shall contain 39 letters, each one representing one of the distinct articulate sounds used in our language.' A note by Barton (s. 2, No. 5, p. 49) states that publication would have ceased with the last issue, but 'a friend of mine at Harvard, Mass., on learning of this kindly offered to erect a printing press and give me all needful aid to go through with it.'. (Inventory #: 55980)
$4,025.00 add to cart or Buy Direct from
Rulon-Miller Books
Share this item