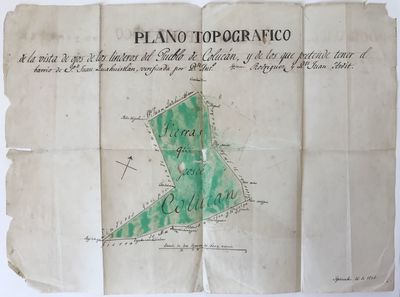 by [Mexico]
[Mexico, 1846. Good.. Manuscript map, approximately 13 x 17.25 inches. Folded; original hand color. Moderate chipping and several short closed tears at edges; three minor losses within map area. Light ink offsetting; Light tanning and scattered faint foxing. A neat manuscript map that delineates the boundaries of the small Mexican town of Colucán in the mid-19th century. Today the village, located in the state of Puebla in the foothills south of Izucar de Matamoros, with a population of about 2,500, is known as San Lucas Colucán. This map, drawn in September 1846, delineates a fairly large area for the town, with the interior of the borders hand colored in green. The principal parcel of land outlined here calculates roughly to about eight square miles, with a tail of land extending from the lower left corner that adds an additional approximate three square miles (using the scale in varas at the lower center of the map). The map lines are drawn to meet and to change direction at named landmarks. Three sides of the town are bordered by lands claimed by one Juan Quahuixtlan; the southern edge is bordered by the land of two other small towns in the region, Tuzantlan and Tejalpa, which also still exist as small villages today. (Inventory #: 1360)
$600.00 add to cart Available from
McBride Rare Books
Share this item