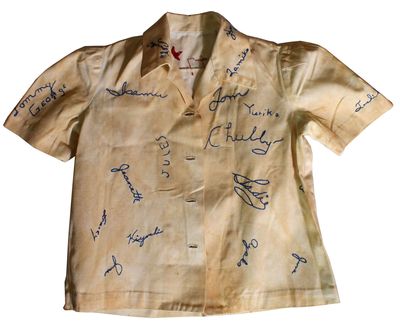 [Poston Interment Camp, Arizona]:[circa 1944-1945]. Cotton shirt measuring 20" from tip of collar to waist, and 16" from shoulder to shoulder. Good: stained and lacking buttons. This is a button down shirt with the embroidered signatures of 46 Japanese Americans we believe were interned at the Poston War Relocation Center. Poston was the largest of the Japanese-American internment camps with a peak population of over 17,000, most of whom were from Southern California. Built by Del Webb of retirement community fame, it was on built on the land of the Colorado River Reservation when the government took control of 71,000 acres. The "227 " embroidered on the back just below the collar is an homage to the first group of Japanese Americans that were forced to evacuate, on six days notice: the 227 residents of Bainbridge Island in Washington state. The island actually held 276 Japanese Americans and those who were away during the expulsion were not allowed to return. Our attribution of place and date is based on the two full names embroidered on the shirt. The first, Yukiye Kanagawa, was born in 1921. There is no mention of a Yukiye Kanagawa in the National Archives records of entry into the camps, but Poston's final accountability roster from November 1945 shows Yukiye with both her maiden and married names. Her maiden name was Nakamura, and though there are two Yukiye Nakamuras listed as internees in the entry records, the other was born in 1939. Yukiye, from Reedly, California, was first interned at Poston, August 4, 1942 and was married to Robert Kiyoshi Kanagawa on February 4, 1944-hence our date attribution (they were both released February 8, 1945.) The other full name we read as "Helen Murata" but nobody by that name appears in any internment record we could locate. There was, however, a Helen Murato interned at Poston as well, the final letter of her name could have easily been subject to a transcription error in the records of the time. We are aware of another shirt containing embroidered signatures of internees from Tule Lake, held by Sacramento State University, but have been unable to locate any others. An exceptional artifact of internment with a palpable presence. (Inventory #: 2915)
$7,500.00 add to cart or Buy Direct from
Langdon Manor Books
Share this item