Television Screen Shots of Second Inauguration of Lyndon B. Johnson 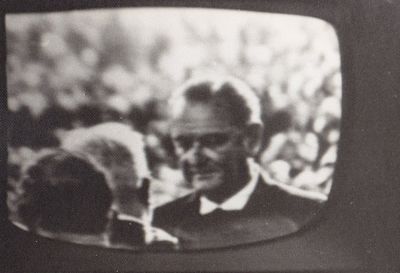 This is a group of black and white photos taken of a television screen showing the second inauguration of Lyndon B. Johnson. Most of them show close-ups of either the President or Hubert Humphrey, with a couple showing them together. One photo shows Humphrey with his hand raised while he is being sworn in as Vice President.

On January 20, 1965, LBJ's inauguration drew a crowd estimated at 1.2 million people, the largest in history until Barack Obama's 2009 inauguration with an estimated 1.8 million people. He delivered a 22 minute inaugural speech that prompted audience applause eleven times. Focusing on domestic affairs, he said: "In a land of great wealth, families must not live in hopeless poverty. In a land rich in harvest, children just must not go hungry. In a land of healing miracles, neighbors must not suffer and die untended. In a great land of learning and scholars, young people must be taught to read and write."

One of the photos is a close-up of Lady Bird Johnson beside LBJ as he takes the oath of office. Not in the shot is the family bible that she holds while he's being sworn in. This moment broke the long standing practice of the bible being held by the executive secretary of the Joint Congressional Inaugural Committee, marking a new tradition of the First Lady holding the Bible during the presidential oath.

An additional image of Leontyne Price, the first African American leading performer of the Metropolitan Opera, is also part of this collection. For the inauguration she sang an operatic version of "America the Beautiful" accompanied by the US Marine Corps Band.

This item is offered by Langdon Manor Books, LLC, antiquarian booksellers. Please do not hesitate to contact us for additional information and/or photos and we will respond promptly. We package our items carefully, ship daily, and have a no hassle returns policy--your satisfaction is guaranteed. We are members of the Antiquarian Booksellers' Association of America (ABAA), the International League of Antiquarian Booksllers (ILAB) and the Independent Online Booksellers Association (IOBA) and adhere to their rules of ethics. (Inventory #: 1724)
$125.00 add to cart or Buy Direct from
Langdon Manor Books
Share this item

Roots. the original saga of an American family. A teacher's guide to the nine-episode series . . . [Cover title]

How Can We Help Japanese American Evacuees? Suggestions for Church Women

[New York] : Committee on Resettlement of Japanese Americans , 1944
(click for more details about How Can We Help Japanese American Evacuees? Suggestions for Church Women)
View all from this seller>