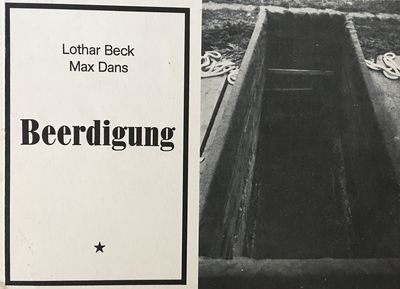 by Beck, Lothar and Max Dans
Unpaginated photobook dedicated "allen noch lebenden Widerstandskämpfern des Dritten Reiches", comprised of approximately 29 black-and-white images from the funeral of three members of the RAF, each accompanied by a short explanatory text on the opposite page, with some pages of just text taken from contemporary newspaper reports, the images depicting the open graves and graveside before and during the funeral, as it becomes a public spectacle and the cemetery fills with spectators and media. Oblong 8vo. Original photo-illustrated wrpps., some slight soiling to cover, very minor wear to edges and spine, overall very good. Hannover (Internationalismus) 1977. On October 27th, 1977, photographer Max Dans attended the funeral of Andreas Baader, Gudrun Ensslin, and Jan-Carl Raspe, three founders and leaders of the RAF (Roten Armee Fraktion) who allegedly committed collective suicide while in prison. They were jailed for allegedly orchestrating several bombings, which caused the deaths of four people. Most media coverage of the funeral ignored the presence of a large police force, and Dans wanted to provide a different perspective. While examining the photographs later with his friend Lothar Beck, a priest, they came up with the idea to produce this photobook. As of May 2020, WorldCat only locates two holdings of this work in North American libraries. (Inventory #: 50456)
$1,250.00 add to cart or Buy Direct from
Bernett Penka Rare Books
Share this item