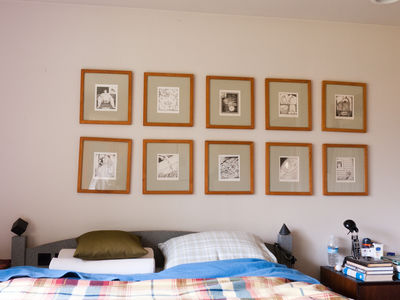 by Ross, Bobby
SEX SERIES, 1981
10 Original Graphite Drawings by Bobby Ross
The drawings of Bobby Ross are a mix of ideas that depict human nature in a realistic and humorous way. He addresses fundamental questions about science, religion and social issues with ordinary objects by creating densely packed images with surprising combinations.
Arguably one of Bobby Ross's most well-received series is his Sex Series. This series is being offered for sale for the first time since purchased by its original owner in 1981. These are the original graphite drawings framed by the artist. Each is meticulously drawn showing difficult-to-imagine details and measuring 6" ht. x 5" w. inside the matting and exterior frame size of 13" ht. x 12" w. A fabulous set of signed graphite drawings. Additional images available upon request. This set will require additional postage for FedEx and insurance.
Sold only as a set and not individually, the ten drawings included in this series are titled:
Sex in San Francisco
Sex in Indianapolis
Sex in Little Rock
Sex in Salt Lake City
Sex in Washington D.C.
Sex in Omaha
Sex in Tijuana
Sex on Mars
Sex on Jupiter
Sex on Saturn-------------------------------------------------------------
Bio: Bobby Ross
Bobby Ross's work has been exhibited widely throughout the United States. He has had four one-person shows at Ovsey Gallery and a one-person show at Koplin Gallery, both in Los Angeles. In 2010 he exhibited an extensive drawing show at the Nora Eccles Harrison Museum of Art at Utah State University, and Artspace Gallery, College of Southern Nevada. Other one-person shows at San Jose Museum of Art, Sheppard Gallery at the University of Nevada-Reno, Seigfred Gallery at Ohio University, and Kilgore College have provided audiences with both large-scale, intricately detailed oil paintings, as well as many drawing series. His work has been shown in national group exhibitions such as Life Stories: Realism and Fiction, Henry Art Gallery, Seattle; Sightings, Gwenda Jay/Addington Gallery, Chicago; The Forty-Second (and the Forty-Third) Invitational Exhibition, Longview Museum of Fine Arts, East Texas. His work has also been included in group exhibitions in California, most notably: Ceci N'est Pas le Surrealism; California Idioms of Surrealism, Fisher Gallery, University of Southern California; A Broad Spectrum: Contemporary Los Angeles Painters and Sculptors, Design Center of Los Angeles The Big Picture: Contemporary Paintings in the Heroic Mode, Riverside Art Museum; Everydayland: Imagined Genre Scene Painting in Southern California, Laguna Art Museum.
Ross's work has been reviewed on several occasions in the Los Angeles Times, Artweek, and Artspace. He has taught painting, drawing and design at the Maryland Institute College of Art, Drake University, Carnegie Mellon University, Ohio University, and the University of Kentucky, Arizona and Nevada. Ross has been awarded the Pollock-Krasner Foundation Grant for Painting and the National Endowment for the Arts Award in Painting. Among Bobby Ross's collectors are Peter and Eileen Norton, Michael Eisner, Eli Broad, Charles Sims, Marti Koplin and Neil Ovsey.
The artist currently resides in Springfield, Missouri where he draws and paints full-time and is preparing for major exhibits in the mid-west. (Inventory #: ASTTX.981)
$15,000.00 add to cart Available from
Chet Ross Rare Books
Share this item
Chet Ross Rare Books
Offered by

by Keiichi Tada, aka: Haruki Tada

Cruise of the 'Pandora' Extracts from the Private Journal Kept by Allen Young, R.N.R., F.R.G.S., F.R.A.S., &c., Commander of the Expedition.

London : William Clowes , 1876
(click for more details about Cruise of the 'Pandora' Extracts from the Private Journal Kept by Allen Young, R.N.R., F.R.G.S., F.R.A.S., &c., Commander of the Expedition.)
View all from this seller>