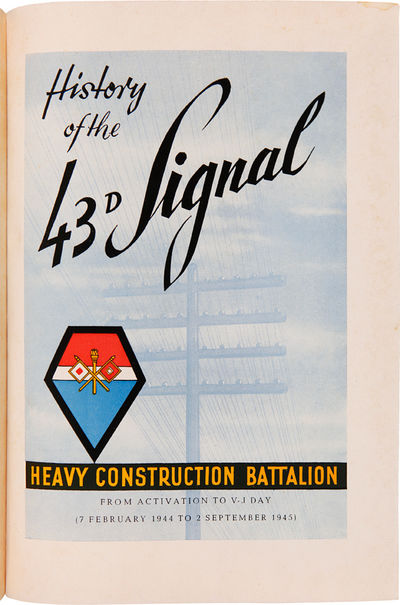 by [African Americana]: [World War II]
[Frankfurt am Main-Schwanheim: Printed by Franz Jos. Henrich, November 1945].. 114pp. Profusely illustrated from photographs. Front board and titlepage printed in blue, black and red. Quarto. Original printed paper-covered boards, tan cloth backstrip. Front board and titlepage printed in blue, black and red. Some staining, moderate edge wear to boards. Very clean internally. Very good overall. An extensive and profusely-illustrated regimental history of the 43rd Signal Heavy Construction Battalion, an African-American unit that fought in Germany during the last two years of World War II. This history of the battalion was partially written and edited by African-American members of the unit serving as associate editors. It was printed in occupied Germany in November 1945, almost certainly in a small edition for distribution among members of the battalion - the concluding section of the volume has a section for "autographs." Included is a detailed timeline of the unit's activities from February 1944 to early October 1945, along with a technical history, pictures of the all-white officer corps, a detailed background of the 43rd, and a short account of individual recognitions. The three most detailed sections of the work give in-depth accounts of the Headquarters section, Company A, and Company B, respectively. These sections are also full of images of the soldiers in training, and include roster lists.

The 43rd Signal Heavy Construction Battalion was formed at Camp Crowder, Missouri on February 7, 1944. The battalion served in four separate campaigns in Europe: northern France, the Rhineland, Ardennes-Alsace, and central Europe, spending most of 1945 in Germany. The battalion was responsible for constructing communications support throughout Europe, laying or hanging hundreds of miles of wire and cable during their time in the war. The battalion was inactivated on May 28, 1946 while in Germany, but was reactivated and redesignated for service in Vietnam in 1966. OCLC records just two copies, at the New York Public Library and Southern Methodist University's DeGolyer Library. OCLC 67778375. (Inventory #: WRCAM55496)
$600.00 add to cart or Buy Direct from
William Reese Co. - Americana
Share this item

AN INQUIRY INTO THE EFFECTS OF THE FOREIGN CARRYING TRADE UPON THE AGRICULTURE, POPULATION AND MORALS OF THE COUNTRY

New York : Printed by D. and G. Bruce, for E. Sargeant , 1806.
(click for more details about AN INQUIRY INTO THE EFFECTS OF THE FOREIGN CARRYING TRADE UPON THE AGRICULTURE, POPULATION AND MORALS OF THE COUNTRY)
View all from this seller>