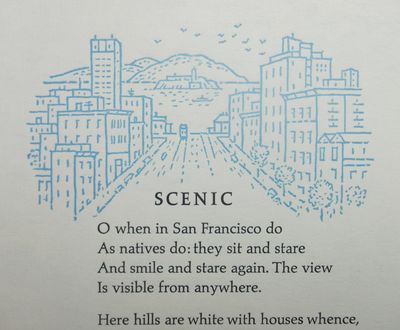 by [Roxburghe Club - Keepsake] Updike, John; Angelo, Valenti (Illustrations)
San Francisco: Printed by Andrew Hoyem, 1976. Limited Edition. No binding. Near fine. Angelo, Valenti. One of 150 copies, quarto size. John Hoyer Updike (1932-2009), one of only three authors to be awarded the Pulitzer Prize for Fiction more than once, is probably best known today for his "Rabbit" series. He often wrote about "everyday life", and this poem, originally published in 1958 (in "The Carpentered Hen"), touches upon the little things which make the city of San Francisco so memorable to so many.

With four blue line-drawing vignettes by Valenti Angelo (1897-1982), a highly regarded designer, illuminator, and decorator of books during a career which spanned decades, doing much of his early work for the Grabhorn Press and The Book Club of California. He also printed books in extremely limited editions under the imprints of "The Golden Cross Press" and "The Press of Valenti Angelo".

This lovely broadside was printed by the inimitable Andrew Hoyem, founder of the Arion Press and keeper of the flame of the Grabhorn Press, for Gale Herrick, Stan Speck, John Borden and Jack Aldridge to present to their fellow members of The Roxburghe Club of San Francisco in May, 1976, in an edition of only 150 copies.

___DESCRIPTION: Broadside printed on laid paper with the watermark of "T H Saunders", four line-drawing vignettes in blue by Angelo (a view down a SF street showing alcatraz in the Bay; Coit Tower; a cable car; and the Golden Gate Bridge) which surround the poem, printing in black; quarto size (11 7/8" by 8 15/16").

___CONDITION: Near fine, clean, free of markings; some light toning along the left margin, a few very light creases along the bottom, and a speck or two of light foxing.

___Swan's Fine Books is pleased to be a member of the ABAA, ILAB, and IOBA and we stand behind every book we sell. Please contact us with any questions you may have, we are here to help. (Inventory #: 19052039)
$440.00 add to cart or Buy Direct from
Swan's Fine Books
Share this item

Adventures of Joseph-Alexandre de Chabrier de Peloubet at the Time of the French Revolution, Together with Some Account of His Forebears in France & the Founding of the Peloubet Family in America

San Francisco : [Printed at the Grabhorn Press] , 1953
(click for more details about Adventures of Joseph-Alexandre de Chabrier de Peloubet at the Time of the French Revolution, Together with Some Account of His Forebears in France & the Founding of the Peloubet Family in America)

London : Chapman and Hall, Ld , 1894
(click for more details about The St. James's Cookery Book)
View all from this seller>