A collection of objects & documents concerning the Ogasawara School of Etiquette 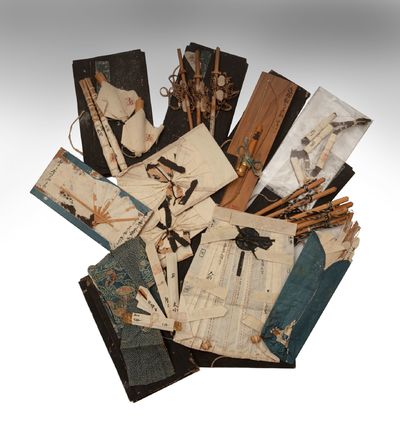 by OGASAWARA SCHOOL OF ETIQUETTE
Various formats and sizes. [Japan]: ca. 1787-96. The Ogasawara School, founded in the 12th century, laid the foundations of etiquette for the aristocratic and samurai classes throughout Japan for many centuries. The school specialized in teaching horsemanship, archery, mounted archery, and samurai etiquette, on and off the battlefield. Over the centuries, the school transitioned itself to focus on a system of courtly manners, along with skills in archery for ceremonial rituals. The school continues today, supervised by the 31st generation leader, Kiyotada Ogasawara. The Imperial House of Japan uses Ogasawara etiquette. This fascinating collection is made up of miniature models or samples of materials and objects required and used at formal Ogasawara events in the late 18th century, as well as a number of manuscript documents. We begin with ten black paper four-sided folding envelopes, each labeled and containing the items below. These envelopes are constructed of thick but flexible paper, with string ties. The labels describe the contents of each envelope and have seals and signatures of either "Hisanobu" or "Nobumichi": 1. a miniature paper model of a horo, which is worn on the back of a samurai's armor. Our horo is made of folded paper with a silk brocade adornment. Measurements are given in manuscript. With this is a model of the bag to carry the horo; 2. miniature fabric samples of pleated trousers, a man's formal kimono and vest, along with samples of neatly wrapped objects, elaborately tied, which were to be carried. They include a sword, a fan, and a bolt of precious brocade; 3. three miniature tachi (swords), each for a specific occasion. Our sample tachi are made of wood and have thick thread attachments; 4. two kinds of miniature torches (taimatsu) along with their holders; 5. a most remarkable miniature wooden bow, mounted on a wooden board. A quiver (utsubo), again made of wood and decorated in gold brocade, is also mounted; 6. Six miniature examples of maku gushi, poles to hold banners. They are joined by ropes (here represented by fine decorative cord); 7. four samples of real hair, cut off and tied during genpuku, the Japanese coming-of-age ceremony; 8. a miniature target - an opened fan - mounted on a board, for the hikime-no-gi, the archery ritual; 9. two elaborate folded paper model sacks to protect the bow when it rains (kasa yumi bukuro); and 10. seven strands of hay and 12 braided strips of paper (kamioki), which were used in ceremonies for two- and three-year-old aristocratic and samurai male children. These are accompanied by 69 examples of very complex ceremonial origami (or origata). Origata (as compared to recreational origami) was developed amongst the higher class of samurai, who stressed formal manners and a sense of decorum. It is a method of how to wrap gifts with very precious handmade papers used for gift-giving and ceremonies in order to maintain sound human relations. Each is folded in it own way and labeled with its intended contents (for example, an obi belt, confectioneries, a brush for calligraphy, shark skin for sword handles, incense wood, a tooth-cleaning stick, a fan, Chinese silk thread, hair ornaments, gold dust, sumi ink cake, perfume, belts for inner garments, face powder, tabi socks, various sizes of fine writing paper, feathers from hawks and cranes for arrows, etc.). Some examples of highly complex ornamental ties are also present. Finally, there are about 20 contemporary letters all concerned with various aspects of Ogasawara etiquette, including gastronomic matters. There is a stiff thick-paper folded cover for a gift, signed "Ogasawara Taizen taifu Nagamasa." There is also a packet of miscellaneous related papers. In fine condition and a remarkable survival. (Inventory #: 7079)
$7,500.00 add to cart or Buy Direct from
Jonathan A. Hill, Bookseller
Share this item
Jonathan A. Hill, Bookseller, Inc.
Offered by


(click for more details about Technique du présent: essai sur On Kawara [Les Cahiers-Philosophie de l'art no. 6])
View all from this seller>