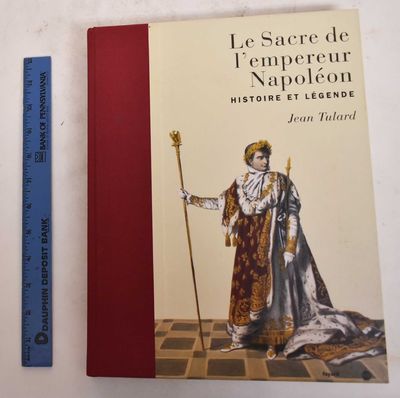 by Tuland, Jean
Paris: Fayard, 2004. Hardcover. VG+. Illustrated paper boards, red cloth spine with gilt lettering, decorative end pages, 195 pp. profusely illustrated in color. Text in French. Translated from rear cover: "An unprecedented spectacle political operation, the coronation of Napoleon, on December 2, 1804, gave rise to an exceptional staging. To the French recruits of privations and heartbreak, it was necessary to give to dream, to the foreigners, enemies of yesterday, it was necessary to mean that France had recovered its hegemony. Almost 20,000 civil servants and soldiers were invited; sets, costumes and music were specially designed for the occasion. At the request of the Emperor, a prestigious work was produced which presents in detail the different stages of the ceremony and its participants. This monumental book counts with The Coronation of the painter David among the most important artistic commissions of Napoleon (started in 1804, it was not completed until 1815 and only circulated secretly among the faithful). The forty plates which were used to print the illustrations are today preserved in the Chalcography of the Louvre museum. Through this extremely rare edition, reproduced here, and a very rich iconography - official portraits with popular imagery -, Jean Tulard relates (notably with the help of the coronation Proces-verbal written by Louis-Philippe de Ségur, grand master ceremonies) and analyzes this incredible event in which the Napoleonic legend was born, long before the shattering victories of the Empire and the propaganda texts composed in Saint Helena." Includes bibliographical references (page 195). (Inventory #: 176833)
$70.00 add to cart or Buy Direct from Mullen Books
Share this item